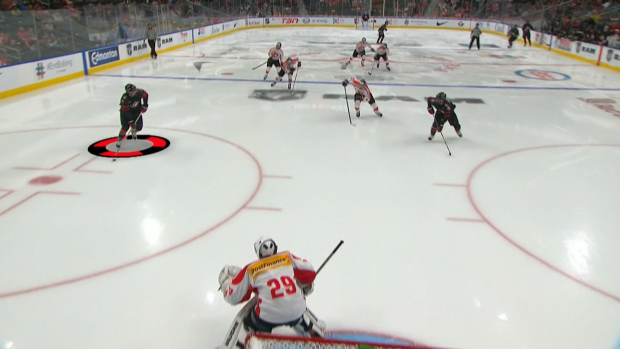 EDMONTON — Team Canada’s selection camp for the World Junior Hockey Championship is well underway in Red Deer, despite a bad start to a Thursday session for which two high-profile players were late and not allowed on the ice.

“When you start to have two sets of rules on the team, now you start to create confusion,” said head coach Andre Tourigny.

Standouts Kirby Dach and Dylan Cozens only watched the skate after showing up late.

According to Tourigny, there was some miscommunication: The players were late because they had treatment.

But after consulting with the players, the coach said he needed to send a message to the team.

“If I let you go on the ice, what kind of message does that send to the rest of the group?” he says he asked them.

“And I said, ‘Do we want to send that message?’” Tourigny told CTV News Edmonton.

Cozens is back for another run at gold while Dach is getting a final chance after thinking he missed his World Juniors window.

The 19-year-old Fort Saskatchewan product would have made the team in 2019 if he hadn’t been considered too valuable to the Chicago Blackhawks.

Dach posted a successful rookie season in the NHL and then the pandemic opened the door for the third-overall pick to get another crack at Team Canada.

“Once I found out that the tournament is going to be played in that bubble format, I got on the phone with my agent quick and said this is something I wanted to do,” Dach said during Tuesday’s media conference.

The third-overall pick in 2019 will soon return to the Edmonton bubble where he helped the Blackhawks dust off his hometown Oilers during the NHL’s qualifying round.

“Lost a couple of friendships in beating out Edmonton. Especially being from my hometown,” he commented.

The six-foot-four, 200-pound centre has a year’s worth of NHL experience under his belt and is expected to play a key role for the Canadians as they attempt to defend gold.

“That’s the best coaching you can have. Having a player like that who shows the way. I think it carries a lot of weight,” said Tourigny.

The only concern for Dach is if the NHL resumes before the tournament ends on Jan. 5. He may get called back by Chicago if NHL teams open camps early in the new year.

“It would be tough if we had one game left and it was the gold medal game and I had to go back and miss that,” Dach said. “But at the same time I’m just focused on my time here.”