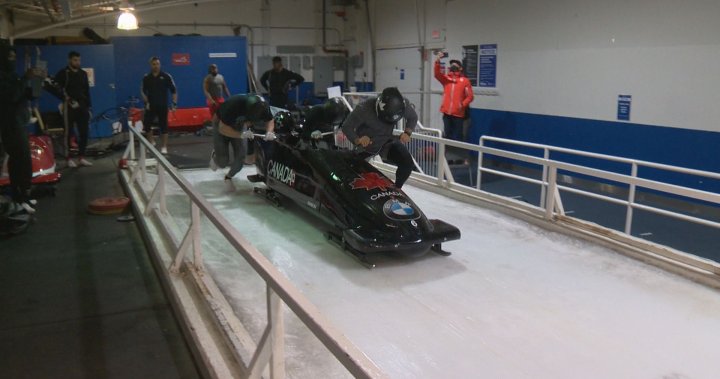 The 2020 CFL season would have meant something different to three particular football players.

For rookie Kayden Johnson, it was his chance to make a first impression on the league as a new face on the B.C. Lions.

For Montreal Alouette Shaquille Murray-Lawrence, it was time for a comeback after a car crash that left him on the sidelines for two years.

And for Jay Dearborn, it was a chance to prove he belongs with the Saskatchewan Roughriders.

However, their hopes were summarily squashed when the season was axed.

“It was disappointing,” Dearborn admits. “But there was also a big part of me that was kind of like it’s out of my control, so there’s no point sweating about it.”

Now, the trio is proving you can’t take them out of the game that easily.

All three have cracked the roster for Canada’s national bobsleigh squad.

“I know I can make this a reality of going to the CFL and hopefully winning a Grey Cup with the Lions and then coming back and representing Canada on the ice,” Johnson says.

Johnson, Dearborn and Murray-Lawrence join a long line of CFL and university players who swapped turf for the ice.

The most famous example may be three-time Olympian Jesse Lumsden, who took up bobsleigh after five injury-riddled seasons in the CFL.

“I knew his (Lumsden’s) skills translating also meant my skills could also translate because we both played running back too,” Murray-Lawrence adds.

“I’m just learning the craft and getting better every day; come to work, work hard and one day hope to be an Olympian.”

“Both sports take like a fast explosive strong athlete,” Dearborn notes. “I think bobsleigh specifically takes a very technical mind. You have less than five seconds to perfect your portion of adding to the sled.”

All three pride themselves on being multi-sport athletes.

At six-foot-three and more than 220 pounds, Johnson is a former USPORTS hurdling champion. Murray-Lawrence and Dearborn have played just about every sport before focusing on football and bobsleigh.

“I think that’s so important for youths or younger adults, to sort of have their foot in a little bit of everything,” Dearborn says.

“You don’t know when you’re young what sport is going to be your favourite sport in five or 10 years.”

When the time comes, the three hope to suit up for the CFL again but don’t see any reason why they can’t chase gold medals along with Grey Cups.

“It’s a surreal feeling,” Johnson says. “Even though we’re going down the track in just over 50 seconds, it feels like an eternity — but eternity in a good way.

“It’s a huge adrenaline rush and at the bottom, I’m just like, ‘Whoa! Now that was pretty incredible. Let’s do it again!’”