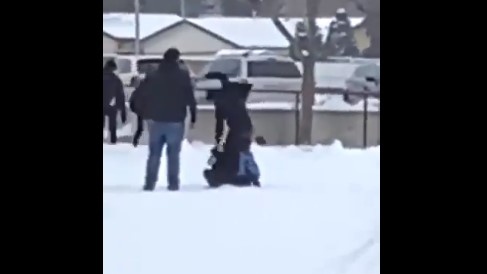 EDMONTON — A Grade 10 student is recovering after being repeatedly struck and beaten in the schoolyard at J. Percy Page over the lunch hour on Wednesday.

Video of the attack was recorded and posted to social media.

The video shows a male repeatedly punching and kicking another person who is shown sitting on the ground absorbing the blows while others nearby look on.

The man lands a combined eight punches and kicks over the course of the 17-second video.

The person posted the video to Twitter says the boy is her brother’s friend, and tweeted “a truck full of young adults who don’t even go to the school came out and threatened him and his friends.”

She says the attack has left the boy with a fractured skull and wrist.

Police say they are investigating and and have taken several witness statements.

The school board did not respond to requests for comment.

The school principal did not immediately return an email query from CTV News.