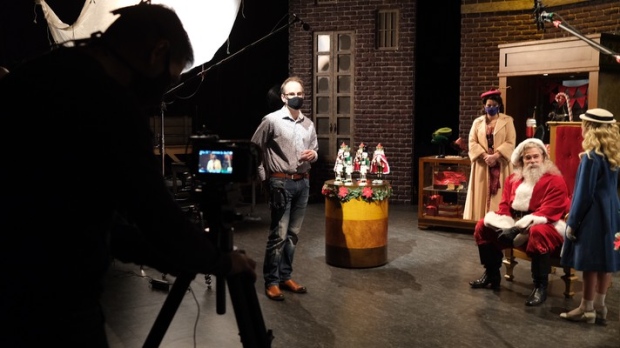 EDMONTON — One of Edmonton’s favourite Christmas productions is back for another year, but it’s not going to be on stage.

Due to COVID-19 restrictions, the Citadel Theatre is presenting A Christmas Carol in a filmed format. They turned their theatre into a TV studio for eight days, bringing in cameras to capture the show.

“It has a really unique sort of film-theatre hybrid,” says the Citadel’s artistic director Daryl Cloran. “It does feel very live because we were able to shoot a scene at a time with three different cameras, so it maintains that kind of live feel.”

Cloran says the theatre decided months ago that it was going to do whatever it took to bring A Christmas Carol to audiences in 2020.

“The one show that we kept saying we’re going to figure out a way to save was A Christmas Carol because it’s such an important part of who we are at the Citadel and our connection to our community.”

The show has raised over $1 million for Edmonton’s Food Bank and has been a tradition for many families in Edmonton for years.

In 2019, A Christmas Carol was updated by the Citadel theatre, building a $1-million set and transporting the story to a department store in 1949. It was the first update to the show in almost two decades.

“It was stressful making it happen last year,” says Cloran. “I was hoping this year was going to be a little bit easier. But it wasn’t.”

Cloran says a lot of the extra stress was due to making sure the 30 actors and crew were distanced as much as possible, and cutting out singing on set altogether.

“What we ended up doing was recording each of the singers individually in a booth by themselves and they would lip sync to the track as they perform in the video, so it became a real complicated shoot for us to set up.”

The 90-minute show will be streamed on a digital platform, available for people across the country to watch.

“Not only will it introduce to Edmonton audiences who haven’t had a chance to check out the citadel before, but it is a way for us to get our work across the country,” says Cloran.

And Cloran says it’s a way for people to still enjoy the classic story about the true meaning of Christmas.

“It would be a humbug if there were no (A) Christmas Carol in some form.”

A Christmas Carol will be available for streaming Dec. 15 with a cost of $40 per household.