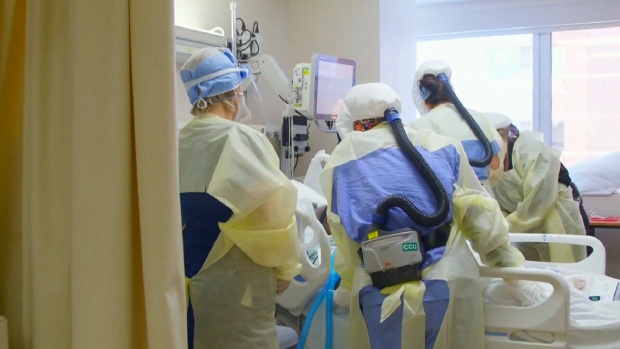 EDMONTON — Alberta’s new COVID-19 strategy is being criticized by some of the province’s doctors as all talk and no walk.

To put it exactly, Royal Alexandra ICU physician Dr. Darren Markland said: “It is confusing, nebulous, and impossible to enforce.”

He and tens of thousands of others tuned in Tuesday afternoon for the announcement from Premier Jason Kenney.

“That was like the 1969 moon shot. Everybody was sitting on their couch listening to that one.”

But what Markland largely heard was that Kenney was turning previous recommendations into rules.

Among the tighter restrictions are a ban on indoor gatherings, capacity limits for businesses and churches, and mandatory masks in urban centers – many of whom already implemented their own face-covering bylaw.

Very different from the moon landing.

“This was much ado about nothing,” Markland commented.

And he believes there is much to do.

He told CTV News Edmonton there is no “flex” left in the health care system, and hospitals have used up the buffer made by postponing some non-urgent surgeries.

According to Alberta Health Services, the province has some 170 adult ICU beds: 66 in Calgary, 72 in Edmonton, 17 in the south medical zone, 12 in the central zone, and six in northern Alberta.

Throughout the week, ICU capacity has held around 90 per cent, said AHS.

Markland told CTV News Edmonton, “Part of our plan is to surge into the (coronary care unit), so if you had a heart attack, there’d be fewer beds to be looked after.”

Mithani, who also works at the Stollery Children’s Hospital, said the only appropriate step in Kenney’s plan is not having indoor gatherings – which she suggested should have happened long ago.

She noted people are still allowed to gather indoors at large places of worship and in bars, casinos and restaurants – contradictions Markland said could potentially be deadly.

The decisions don’t appear to be based on science, Mithani added, since contact tracing has broken down and up to 80 per cent of cases have no information about where they were contracted.

“I’m really disappointed with the half measures that were put in,” the ER physician told The Canadian Press in an interview Wednesday.

“I, 100 per cent, understand there needs to be a balance between the economy and managing this pandemic, but we are now at a point where our health-care system is about to break and that needs to be made the priority right now.

“Our economy relies on the health of Albertans.”

But during the Tuesday announcement, Kenney called entrepreneurs the “unsung heroes” of the pandemic and reminded Albertans to think of their sometimes generations-old businesses which have been threatened by public health measures.

“I would ask people who have the certainty of a paycheque, particularly a government paycheque, to think for a moment about those individuals whose entire life savings are tied up in a business such as that,” Kenney pleaded.

Markland countered that some of his ICU patients have been business owners and employees of a small business.

He called it Trumpian for the Alberta government to pat itself on the back for its early pandemic success, when it was heeding more expert advice.

“To then threaten the people who are doing the best to look after the problems that have been generated from this by talking about their paycheques is just a veiled threat. And that is inappropriate.”

He expects the impact from the measures, if any in three weeks, will be small.