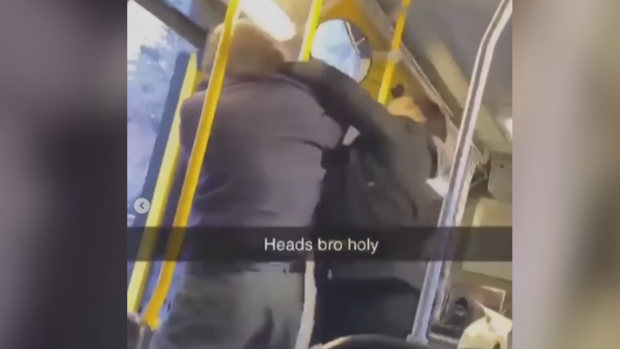 EDMONTON — Edmonton Transit Service (ETS) officials are investigating an apparent shoving match between a bus driver and a passenger who was not wearing a face mask, after the incident was captured on video on Tuesday.

One video posted Wednesday of the altercation appears to show the driver escort a woman from the back of the bus, he tosses her belongings off the bus, then a scuffle ensues.

The woman makes it to the front doors when she appears to try to enter the driver’s area. That’s when the driver grabs her and pushes her off the bus.

The woman tries to get back on, but the driver shoves her off a second time.

The driver does manage to remove the woman from the bus then closes the doors.

The woman kicks the bus before it drives away.

It’s unclear how the altercation began.

ETS would not accommodate CTV News Edmonton’s request for an interview, but in a written statement said that it was aware of the incident.

“The safety of our customers and staff is a top priority for us,”  director of business integration and workforce development for ETS Carrie Hotton-Macdonald said in the statement.

“We are deeply concerned with the video and are currently investigating as we take these matters very seriously.”

The ETS official added they cannot assume the incident was mask-related.

“We work closely with our labour relations staff during investigations to follow due process,” the statement said. “Corrective action may be taken for an operator as deemed appropriate based on the findings of the investigation.”

The statement went on to say: “A customer can also be banned for a period of time from ETS property, if their actions warrant it.”

Edmonton transit union president Steve Bradshaw told CTV News Edmonton while the driver’s actions were not by the book, they were appropriate given the circumstances.

“It’s an incident that would not have happened had the patron been in compliance with the law.”

Bradshaw said that if the ETS investigation results in any penalties against the driver, the union will defend him.

“Some of the managers will say a bus driver’s job is to keep his passions in check and that’s fair, we agree, but there are also exceptional circumstances and this may be one of those.”

“I can’t comment on the actions or the standard operating procedures for bus drivers,” said Dziadyk. “I saw someone taking control of the situation and intervening in a difficult situation.”

The Ward 3 councillor acknowledged that enforcing the city’s mask bylaw comes with challenges.

“All transit operators, their safety is important and it’s not up to them to enforce the bylaw.”