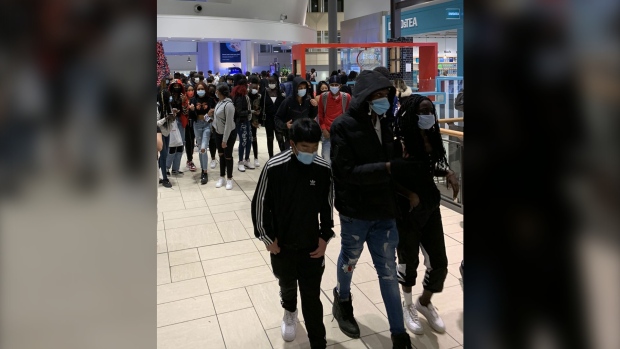 CALGARY — Police officers were called in to help disperse a crowd of “unruly customers” at Chinook Centre Friday evening, CTV News has learned.

Images and videos of large numbers of customers, mainly teenagers, were posted to social media on Nov. 27.

Along with no physical distancing between the shoppers, it appeared that the crowds exceeded the mandatory 25 per cent capacity limit of the shopping mall.

The Calgary Police Service confirmed to CTV News on Saturday that officers responded to the situation at Chinook Centre after receiving a call about “concerns about crowds.”

Upon arrival, additional units were called in to deal with some “unruly customers” but, in the end, all the shoppers found to be in violation of the province’s new restrictions on gatherings were escorted out.

No charges were laid.

According to the government of Alberta’s new COVID-19 guidelines, which were announced Tuesday and came into force on Friday, all businesses must maintain a limit on the number of customers inside their stores at 25 per cent of their capacity laid out in the Alberta Fire Code.

This limit also applies to the hallways and all other interior areas of shopping malls.