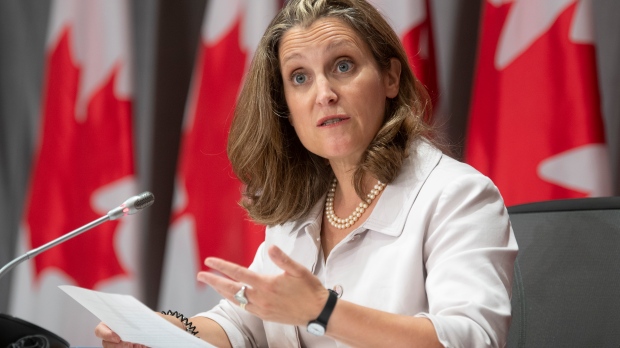 OTTAWA — Deputy Prime Minister and Finance Minister Chrystia Freeland will be unveiling a fall economic update on Monday afternoon, offering the country a revised look at the state of the federal finances and the impact the ongoing COVID-19 pandemic has had on Canada’s economic outlook.

While 2020 is set to pass without a full federal budget, this fiscal update could also include a suite of new announcements about future spending plans or proposals to steer the country through, and ultimately out of, the current health and economic crisis.

Already facing a historic deficit projected at $343.2 billion by the end of 2020-21, and spending levels comparable to war-time as of July when the last fiscal snapshot was issued, expectations are that the deficit revealed on Monday will be larger.

In the midst of a second wave of the virus that’s hitting hard in several provinces, the federal government has had to rework and re-deploy certain fiscal supports, including revamped wage and rent subsidies for businesses, a reworked Employment Insurance program, and new sick leave and caregiver leave programs for those who have to take time off work due to COVID-19.

Financial observers and federal political parties have been speaking in advance about what they’d like to see when the update is released after markets close at 4 p.m. EST.

From hopes for more details on a daycare program, and sector-specific bailout plans for those industries hardest hit, to the provinces looking for health transfer top-ups and calls for as much fiscal prudence as possible amid a pandemic, it remains to be seen which stakeholders were the most effective in lobbying the Finance Department.

Freeland will be addressing the House of Commons about the Liberal’s plans for the months ahead. The federal government is planning on rolling out a more compressive federal budget in 2021.

As of July, the federal debt was projected to exceed $1.2 trillion by the end of the fiscal year, and the debt-to-GDP ratio was forecast to rise to 49.1 per cent.

As well, the overall economy was expected to contract by 6.8 per cent in 2020 — its sharpest drop since the Great Depression — and COVID-19 health and safety spending was pegged at more than $231 billion.