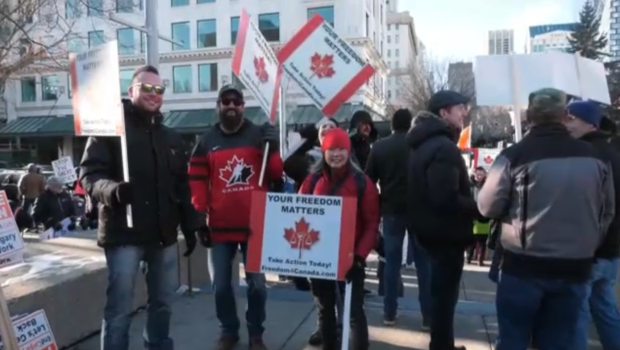 EDMONTON — There are looming questions this weekend about enforcement of new provincial COVID-19 measures. The province promised on Friday that the new rules would be enforced, but there have been several displays of defiance throughout the province without consequence.

“Those who choose to break the rules will be subject to fines,” said Justice Minister Kaycee Madu on Friday where it was announced that 700 peace officers had been granted the authority to enforce public health orders.

“To respond quickly and decisively to situations where groups are breaking public health measures, and thereby endangering the health of their community.”

Less than 24 hours later, more than a hundred gathered outside the Alberta Legislature. The new rules restrict outdoor gatherings to no more than 10 people.

There were similar scenes in Red Deer and Calgary, as residents gathered to protest face masks and the new measures.

Provincial sheriffs and city police were present at the rallies, but no tickets were handed out, leaving some Albertans and the provincial official opposition to ask, why?

“The UCP have also not allocated proper enforcement resources to make sure that their own restrictions are followed,” said NDP Justice Critic Irfan Sabir in a statement on Sunday.

CTV News Edmonton reached out to Alberta Justice for answers on Sunday, but they have not responded to our request for an interview.

Since the beginning of August, the City of Edmonton has issued more than 2,000 warnings for people not wearing masks and only four tickets.

The interim city manager says its peace officers will require training before enforcing the rules.

“I think what you’re going to see is stronger actions being taken more quickly, and so folks will get upset, but quite frankly that’s what we need to do at this point in time,” said Adam Laughlin.

Neither, city officials or Edmonton police had enforcement numbers for this weekend available.