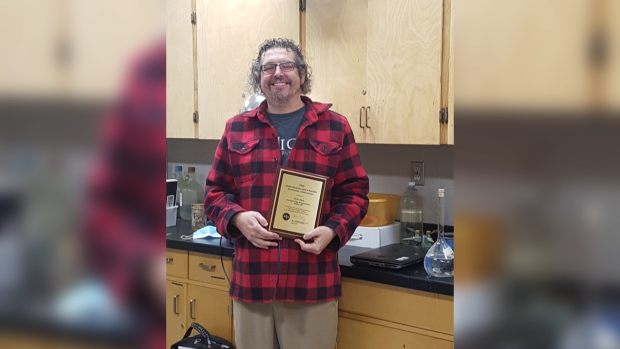 RED DEER — A Sundre teacher recently diagnosed with terminal cancer has won a prestigious award for his excellence in the classroom.

Ryan Beck, a teacher at Sundre High School, was awarded the 2020 Canadian Association of Physicists’ award for excellence in teaching high school physics in the prairies and Northwest Territories.

“I’ve been working towards this specific goal since 2012 just because it is the most prestigious award, and I figure that’s the kind of teacher I want to be for my students,” Beck said.

“If there’s teachers out there who are that good, I want to be that good for my students.”

Beck was recognized for a multitude of reasons, including his work with the Perimeter Institute to train teachers across Alberta in using modern physics in the classroom, acquiring grants for better lab equipment so his students have more hand-on learning opportunities, and helping them apply physics to the wider world.

“I wanted to move to lab-based teaching because I think hands-on learning is the only real way to deeply learn about the subject,” said Beck.

One of his students, Lawsen Agustowich, commented, “The labs that he designs make us think critically in a way that a scientist would have to.”

Beck received word that he had won the award in early September on the same day he was diagnosed with incurable stage four esophageal cancer.

“It’s been an emotional few months, for sure, because I want to keep doing this. I want to keep teaching. I love my job, and terminal cancer wasn’t in the plans right now,” the teacher told CTV News.

Beck is undergoing chemotherapy which has helped him feel stronger. Before the transition to at-home learning, the chemotherapy allowed him to be back in the classroom.

“I have a really tough week after my chemo, but then I’m able to spend two weeks teaching,” said Beck.

“It doesn’t change the fact that the cancer is incurable, and so I’m just hoping for as many months as I can have to keep doing what I do.”

Beck’s colleagues have started a GoFundMe to help Beck through his cancer journey. It has raised more than $20, 000.