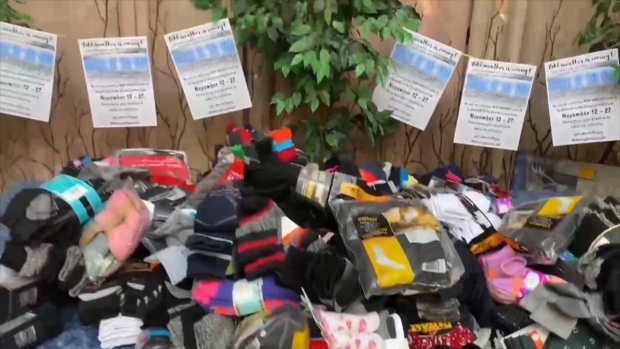 EDMONTON — A south Edmonton school has gathered over 1,100 pairs of socks as a part of a local campaign to help the homeless.

The students at St. Mary’s Elementary School gathered the donations as part of a social justice project to mark the first week of Advent.

Lauren Hawes, the assistant principal at the school, explained that the project goes hand-in-hand with what the children are studying now.

“We are learning about democracy and we all want to have an equal Christmas.”

The school’s sock drive boosts the growing total for the SockItToYEG campaign, an effort that has seen its donation totals for the last three years. Kevin Medin, the founder of SockItToYEG, has set this year’s goal even higher.

Medin noted that this year there has been no shortage of parters to help the cause.

“I’ve reached out to a Calgary company called Rocket Socks… they’ve donated a thousand socks… Kodak is participating like they did last year… I’ve got Mr. Nice Sock… the Shoe Shine Shack downtown is collecting for me… the Derrick Club and two more business in Spruce Grove are collecting for me as of today.”

Medin will drop off the thousands of collected socks at the Bissell Centre in a few weeks so they can be made available for Edmonton’s homeless population. Edmontonians can reach out to Medin about donations on Twitter @KMedin2 or on Instagram @sockittoyeg.