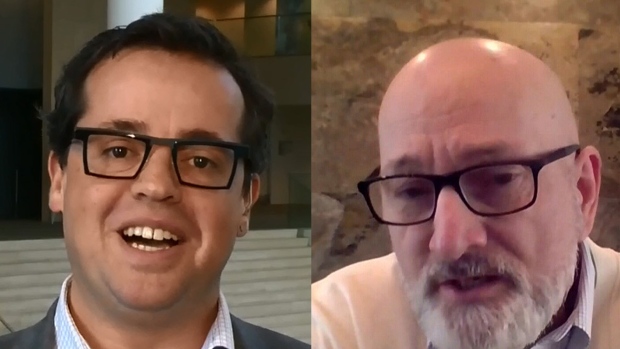 Mike Nickel – who has raised money for a potential campaign but not officially announced his candidacy – tweeted an image of a private message from former councillor Michael Oshry Monday morning.

“I thought I would let you know that I have an exploratory committee made up of business/development/political leaders working and finalizing…a mayoral campaign for me,” the message from Oshry read.

“Do you want to help me instead of run against me?” Oshry asked in a direct message stamped 10:15 p.m.

Monday night Nickel responded with an image of Darth Vader that read: “Join me, and together we can rule the galaxy,” saying Oshry’s message gave him that “vibe.”

Nickel declined to answer questions about the exchange on Monday, but said he’d provide a statement Tuesday.

Dave Cournoyer, creator of the daveberta.ca politics website and podcast, said it’s not unusual for candidates to speak prior to a race, but said the conversations are usually kept confidential.

“I think it’s pretty tacky to take a sceenshot and post it, especially to someone who potentially could be your competitor and who is your former colleague,” Cournoyer said Monday night.

“Seems like it’s a very unconventional way for a mayoral campaign to be launched. I don’t expect that Michael Oshry expected Mike Nickel take a screenshot and post it on Twitter. Or maybe that was part of the strategy,” Cournoyer chuckled.

THE RACE SO FAR

So far, two candidates, Cheryll Watson and Diana Steele have declared their intentions to run for the mayors chair.

Don Iveson has decided he will not run again in 2021.

Current councillor Andrew Knack and former councillor Kim Krushell have both said they are also considering running for mayor, as has Nickel.

Last month former councillor and federal cabinet minister Amarjeet Sohi told CTV News Edmonton he has not decided if he’ll run or not.

Cournoyer said the potential of five current or former city councillors running for the top job makes it impossible for him to pick an early front runner.