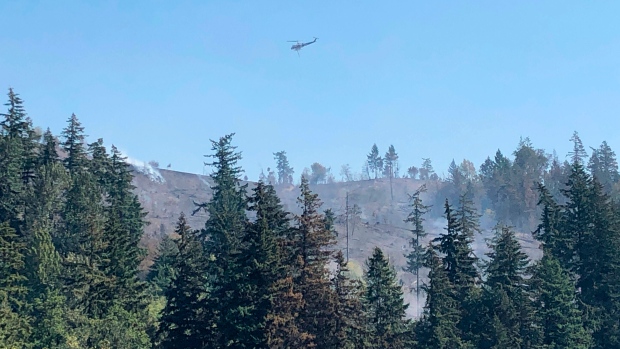 JASPER, ALTA. — International borders or not, fire crews are at the ready to help where they’re needed.

Wildfires burned in the western states of the U.S. including Oregon, Washington and California in the summer and through fall. Millions of acres of land were destroyed, towns were levelled, and hundreds of thousands of people were displaced.

And with Jasper National Park as a member of the Canadian Interagency Forest Fire Centre, Jasper specialists were sent to Oregon, U.S.A. in September to help firefighters already there, and were onsite from Sept. 17 to Oct. 2.

“People needed help. The situation was quite dire,” Haug said.

“There were unprecedented conditions in Oregon, and the U.S. in general. When other agencies need help, we help them.”

Haug said on arrival, crews went through introductory and tactical briefings at the Redmond Air Centre then sent to other fires to work.“

Everyone on the Jasper crew was sent to a fire called the Lions Head, a reference to its geographical location.

“There were 25 of us in total – a 20-pack unit crew, four task force leaders, one helicopter manager and a Parks Canada representative,” Haug said.

The roles of each person were specific and this, Haug said, was to ensure everyone was “talking the same language”.

Haug went as a helicopter manager and ended up being a helicopter crew member, one of the people assigned to helping with the elements that help a helicopter function well – fuel supply, an aviation engineer on hand, and more.

“When we arrived (we were) on the patrol, mop up phase,” he said.

Haug explained firefighting is not only handling raging flames but tackling small spots that can turn into tens of thousands of hectares of fire.

“A lot of firefighting is making sure that fire is out,” he said.

“For the fire crew – they patrolled the perimeter of the areas on fire, and were given a section of the area to patrol, mop up, which is extinguishing hot spots.”

Haug said the fire complex affected hundreds of thousands of people, and 500,000 people were evacuated at one point.

“There were quite a few fatalities,” Haug said. “It was quite a tragic event”.

He said the firefighters were overwhelmed.

Haug said strict COVID measures were in place throughout their time there, including random temperature checks, and everyone was encouraged to keep their cohorts small.