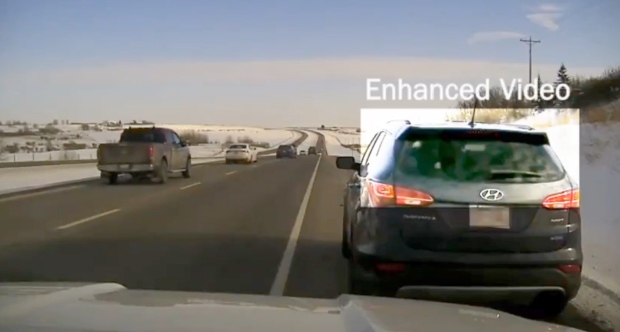 CALGARY — Much like Santa, Alberta RCMP are always watching whether you’re being naughty or nice — and video posted to social media Friday shows how one driver earned his way onto the naughty list.

Dash cam video captured in October by a member of the Cochrane detachment shows an SUV with a tinted rear window on the side of the Highway 1 west of Calgary after it was pulled over by police for going 142 km/h in a 110 km/h zone.

The video is then enhanced, allowing viewers to see what is happening inside the SUV. It rocks gently as two people in the front seats appear to switch spots.

The RCMP officer apparently noticed as well, and marches up the car before the video ends.

The man was ticketed for speeding and driving while unauthorized.

“The member watched the male driver change positions with the female passenger, and this was caught on the in-car camera system,” read a tweet.

“He was also found to be out of federal prison on parole for a previous drug trafficking conviction. As a result of this traffic stop, the driver’s parole was revoked and he was returned to Drumheller Institution.”

1/2 In October, a #Cochrane RCMP Traffic member stopped a vehicle for speeding 142 km in a 110 zone. The member watched the male driver change positions with the female passenger, and this was caught on the in-car camera system. pic.twitter.com/PKVaAiI01O