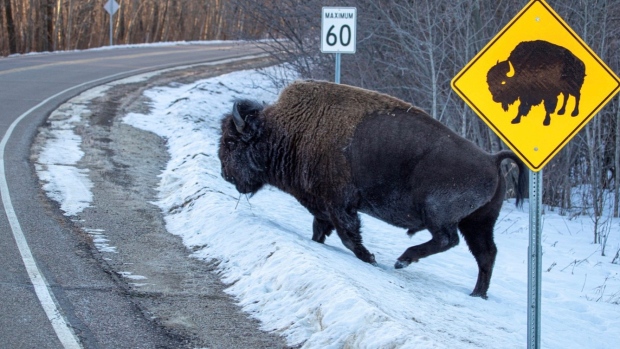 “Nice to see that Parks Canada staff have successfully trained the bison to use their marked crossings!” Tim Osborne joked in a tweet posted Sunday.

The image was captured at Elk Island National Park east of Edmonton.

Osborne said he usually tries to exclude roads and signs from his wildlife images – but the connection was too funny to deny.

“I just had to chuckle at the luck and try to get a photo quickly cause it didn’t last long. It crossed over pretty quickly but I kept my fingers warm enough that I was able to get a couple shots at least,” Osborne said.

The post stirred feelings of patriotism for some – and attracted puns from others.

Elk Island National Park – about a 30 minute drive from Edmonton – is described online as a “an important refuge for bison, elk, and more than 250 bird species.”

Osborne said it’s one of his favourite spots to hike and photograph moose, coyotes, birds and bison. But he knows not to get too close.

“I have a long telephoto lens, I certainly don’t mess around when it comes to something like the bison. They seem pretty tame, but I wouldn’t want to get on their bad side,” Osborne warned.

More of Osborne’s work can be found online – and he said he may consider selling copies of the bison image if enough people are interested.

I’m usually just happy to let people enjoy it, but every year I do an Alberta wildlife calendar and I do sell some cards and prints. So who knows, maybe it’ll end up on one of those,” he said.

The Elk Island website describes their bison as “wild, dangerous, unpredictable” and says they may charge without warning.

Parks Canada provides information online for how the public can safely visit the park and view the animals.