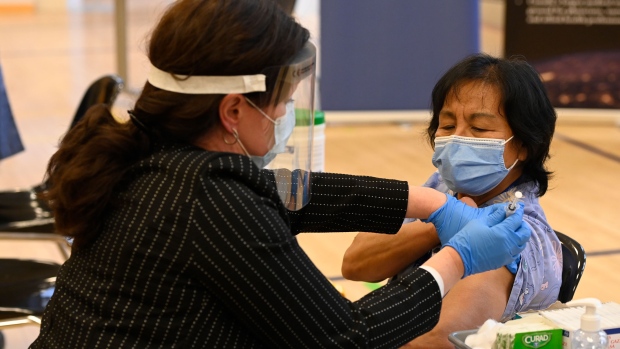 OTTAWA — The first COVID-19 vaccines were injected into the arms of Canadians today, a historic moment some have dubbed “V-Day,” as the country enters a new phase of the ongoing fight against the novel coronavirus.

In Ontario and Quebec, the first shots were administered to prioritized people on Monday, after Pfizer-BioNTech’s initial shipments of doses landed on Sunday night.

This week, 14 sites across the 10 provinces will be receiving Canada’s initial 30,000 doses.

The landmark vaccination effort is focusing first on the people who the virus has hit hardest in this country: staff and residents of long-term care homes as well as frontline health care staff treating COVID-19 patients.

In what Ontario Premier Doug Ford is calling the first vaccines to be given in Canada, health-care workers were some of the first to receive some of that province’s initial 6,000 doses. The first shots are being administered at the University Health Network in Toronto, and camera crews were on-hand to capture the moment, carried live on TV.

The first person in Ontario to receive the vaccine was Anita Quidangen, a personal support worker at the Rekai Centre, which is the first multilingual, non-profit nursing home in Canada.

“She has worked tirelessly to care for some of our most vulnerable, both throughout this pandemic and since her first days as a PSW in 1988. Anita has spent years rolling up her sleeves to protect our province, and today, she didn’t hesitate to find a new way to do so,” said Ford in a statement.

In Quebec, vaccinations are happening first at the Maimonides Geriatric Centre in Montreal and at Saint-Antoine in Quebec City. Both facilities are long-term care homes. That province was set to receive 1,950 initial doses.

“We finally have a tool to protect the residents, so it’s a great day for us,” said Lucie Tremblay, the director of nursing for CIUSSS West-Central Montreal, in an interview on CTV News Channel. “It’s the beginning of the end of this awful illness. I think that for the last 10 months, everybody was under a lot of stress. We were always afraid that the residents would get the illness, we were afraid of losing residents and we did, unfortunately.”

Over the course of the day, more shipments — from UPS, who the pharmaceutical giant has contracted to deliver the vaccines — will be arriving at the other delivery sites across Canada, where plans are in place to start vaccinating even more health-care staff and long-term care home residents and their caregivers, on Tuesday.

According to federal Procurement Minister Anita Anand, approximately 30,000 more doses are expected to arrive next week, as the country’s supply will continue arriving in stages.

“We’re all feeling, maybe just a little tiny sigh of relief now… maybe there is hope that we’ll get out of this incredible period that we’ve been through that’s been so brutal on everybody,” said retired Canadian Armed Forces Gen. Rick Hillier, who is leading Ontario’s COVID-19 vaccine task force, in an interview on CTV News Channel Monday.

He said it’s the start of what will be likely close to a year-long process to see everyone who wants to be vaccinated, able to do so. “Maybe it’s not the light at the end of the tunnel, but it’s kind of like somebody lighting a match, to light that light.”

While it’s the moment many have been waiting for, infectious disease specialist and Ontario vaccine task force member Isaac Bogoch told CTV’s Your Morning that this first batch is more like a “trial run” until more shipments arrive in the coming days and weeks.

Between now and the end of December, Canada is set to receive 249,000 doses from Pfizer, after the federal government secured an early first delivery just days ahead of Health Canada’s authorization. The initial plan was to see Canada’s vaccine effort kick off in earnest in January.

The provinces have been tasked with keeping track of who has been vaccinated and ensuring they come back on time for their second shot, but the federal government will also be keeping track of the rates of immunization.

PANDEMIC FAR FROM OVER

The big week finally comes more than nine months after the World Health Organization officially labelled global SARS-COV-2 outbreaks a pandemic and Canadians first entered lockdown amid a first wave of infections. Since then, infections dipped and surged again. Health officials have confirmed more than 460,000 cases of COVID-19 and close to 13,500 deaths. Worldwide, the novel coronavirus has killed more than 1.6 million people.

The Pfizer-BioNTech shots are the first of several vaccines expected to be on the market soon, according to experts, after record-breaking development and production by scientists around the world.

Canada has signed deals with seven vaccine manufactures, securing more than 400 million doses of potential COVID-19 vaccines, should all trials pan out.

“This is incredible stuff. We all know how horrible it’s been with the pandemic globally and of course here in Canada,” said Bogoch.

“This is good news. But our fight against COVID-19 is not over,” he wrote. “Now more than ever, let’s keep up our vigilance.”

Canadians should “double down” in the coming weeks, as the vaccination programs are likely to face a number of hurdles, Bogoch said.

As well, the Pfizer-BioNTech vaccine is not the COVID-19 panacea.

Because the Pfizer-BioNTech vaccine’s requirements are particularly complicated, including the need to be stored at -70 C, initial doses are not being distributed to Indigenous communities or the territories. The hope is that the Moderna vaccine candidate, which has yet to be approved by Health Canada but has less complicated storage requirements, will be able to roll out to those communities soon.

Moderna’s vaccine candidate is now the most advanced in Canada’s regulatory process, but there isn’t a date or estimate yet for when it may be given the green light.

Anand said that the government is currently in talks with Moderna about receiving initial doses early.

“We are in touch with our suppliers every day, including Moderna, and we are pressing for early deliveries of the doses pending Health Canada regulatory approval,” said Anand in an interview with Evan Solomon on CTV’s Question Period that aired Sunday.

Bogoch suggested that a “mobile truck” operation could even administer a less complex vaccine like Moderna’s to people experiencing homelessness in urban areas, but in the meantime “we just have to work within the confines of the vaccine properties that we have access to.”

While this week is a promising milestone during a long pandemic, Canadians are a long way out from “normal,” said Bogoch.

“We’ll probably start to see a lifting of these health restrictions when enough Canadians have had access to the vaccine,” he said.