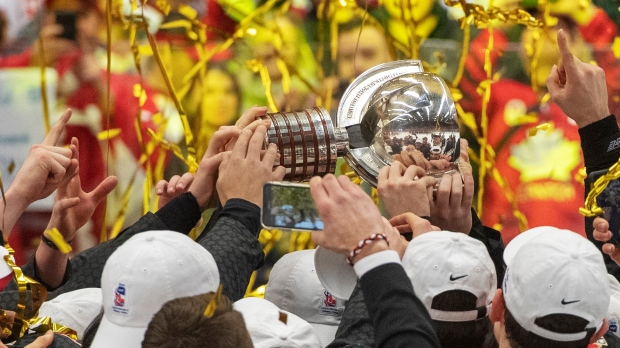 EDMONTON — More than half of the World Juniors pre-tournament exhibitions games have been cancelled after a COVID-19 outbreak inside the Edmonton bubble.

The International Ice Hockey Federation released a revised exhibition game schedule on Saturday that pares down the number of games from the initially scheduled ten matchups down to just four.

The revisions were needed after eight German players and two Swedish staff members were announced on Friday to have tested positive for COVID-19.

Team Sweden will remain in quarantine until Dec. 21, but players and staff who have already tested positive for COVID-19 are exempt. The Swedes have already had to replace four players, the team’s head coach and a team manager due to coronavirus precautions.

Canada was scheduled to play Sweden on Monday.

Alberta’s Chief Medical Officer of Health, Dr. Deena Hinshaw, said she remains confident in the integrity of the bubble and related COVID-19 protocols.

“My job is to protect public health, and I wanted to make sure that the protocols that were in place were rigorous and would not cause any risk to the public,” she told reporters on Friday.

On Friday, the IIHF released a statement that said in part that despite the positive tests, “early indications show protocols working, tournament remains on schedule.”

The 2021 World Juniors remain slated to begin on Christmas Day with three games on the opening day schedule.