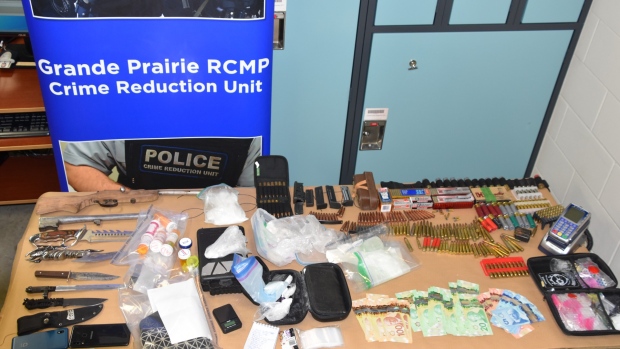 EDMONTON — Three people in Grande Prairie are facing a number of charges after a drug trafficking investigation, according to RCMP.

Mounties began the investigation in November and executed a search warrant at a downtown home on Dec. 16.

Leonard Huyghebaert, 50, and Carole Gaudet, 47, have both been charged with three counts of possession for the purpose of trafficking, possession of a controlled substance, possession of property under $5,000 obtained by crime and several firearm-related charges.

Huyghebaert was also charged with two additional counts of possession of a weapon while prohibited.

He and Gaudet are both scheduled to appear in Grande Prairie provincial court on Jan. 11, 2021.

A third person, a 42-year-old man who has not been named, was charged with three counts of possession for the purpose of trafficking.

Anyone who suspects drug activity in their community is asked to contact their local police or Crime Stoppers at 1-800-222-8477.