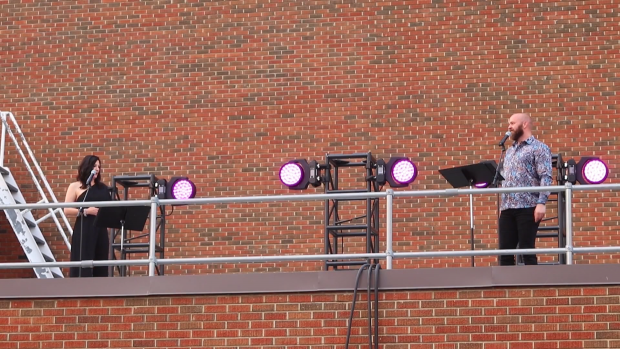 EDMONTON — The World Juniors hockey players aren’t the only people who are in a bubble in Edmonton. The performers in Edmonton Opera’s Drive-in Christmas special will be in their own plastic chambers, but you will get to see and hear them perform live.

Up on the rooftop of the Jubilee Auditorium and inside heated plastic bubble is where the singers will be for the shows. The audience will be in their cars in the parking lot listening to the concert broadcast on their radio. Even though it was a mad dash to put it together, the opera says it’s worth it.

“Every year in Edmonton people go to Christmas shows at the Jubilee the Winspear, I think it’s such a tradition for people,” says Cameron MacRae from Edmonton Opera. “This really allows families to get together in a safe way.”

This is the second rooftop, drive-in concert the opera has staged. The first one in September, was a big hit and lot warmer. But even though it’s colder outside now, warming people’s hearts with live music is important to the performers.

“Christmas can be an exciting time but also a challenging time for people even without a pandemic happening,” says Nicole Brooks. “So, I think a little bit of cheer, a little bit of joy, love spread is really important. Even delivered from a bubble.”

The 45-minute Christmas show will feature some of your favourite carols from Edmonton Opera’s emerging artists studios. The production will feature projections, lighting and a setting that will cleanse your spirit.

“It kind of seems like singing in a shower,” laughs Brooks.