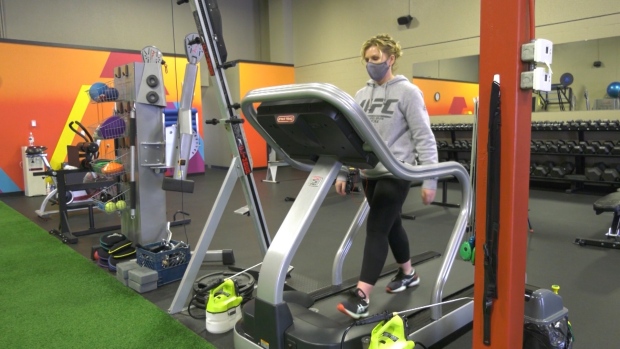 EDMONTON — An Edmonton gym owner and personal trainer is sharing her struggles with COVID-19 after multiple shut downs and her own battle with the disease.

Shara Vigeant’s gym, like so many others in Edmonton, is empty. She was forced to close for a second time this year.

“I still understand it, but it’s even harder because we’re still recovering from the first time that we shut down,” said Vigeant.

She says there was an increase in new members after the first shutdown, which helped.

“My business model has never been about packing people in here, it’s always been about privacy and space, so we were kind of distancing before it was cool,” said Vigeant.

“We’ve had over 7,000 people through here, and not one positive case.”

Even with government relief programs, Vigeant had to dip into her own saving to keep up with the bills. She also traveled to the U.S. recently, to earn money training a UFC fighter.

That’s where she became a fighter herself – battling COVID-19.

“It was absolutely horrific,” said Vigeant.

She had everything but a fever.

“The worst muscle aches, pain radiating down my legs, my kidneys hurt. My head felt like it was going to explode every day, sinus congestion, cough, extreme fatigue. I had everything.”

Vigeant was surprised the toll the disease took on her body. She’s still dealing with fatigue and has a cough.

Now she’s not only concerned with COVID-19’s impact on her business, but what long term effects it will have on her health.