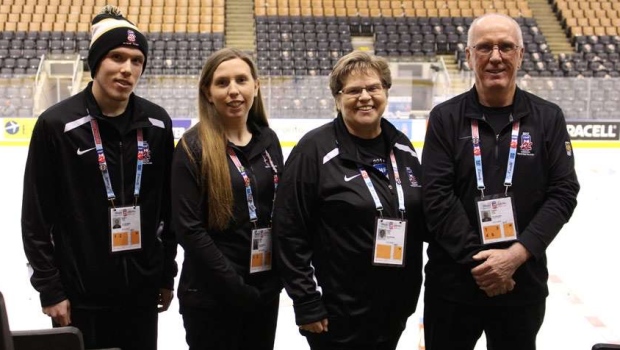 EDMONTON — If the World Juniors have been held in Canada recently, Shelby Tate has been there.

The Uxbridge, Ont. resident has volunteered at the tournament alongside her family at each of the last three times it’s been hosted in Canada: 2019 in Vancouver and Victoria, and both 2017 and 2015 in Montreal and Toronto.

“It’s always been a positive experience between the friends that you make volunteering, the people running it … it’s always been really pleasant,” she said.

As a volunteer, she’s done everything from sell programs, steam flags for post-game ceremonies and appear on the ice to present player of the game awards.

But this year, she remains in Ontario as the tournament plays out, sidelined by public health and travel restrictions and recommendations amid the ongoing COVID-19 pandemic,

“Just not really a good time,” she said.

Coronavirus precautions have changed this year’s tournament and how it works.And while many like Tate won’t get a World Juniors experience this year, volunteers are still working to keep the event running smoothly.

“Our organization would not be able to accomplish hosting successful, world-class events without the passion and leadership of volunteers,” said Corinne Ethier, Hockey Canada’s manager of event volunteers.

Ordinarily, volunteers are among the most visible elements of the World Juniors, and assist with everything from transportation and hospitality to managing the in-game experience and entertainment at the rink.

Hockey Canada says while many of those fan-facing volunteer roles are no longer needed, the demand remains for support in areas like medical care, team services and off-ice officiating.

“Without fans this year our focus remains on providing the competing teams with a world-class experience,” said Ethier.

Hockey Canada didn’t provide numbers on exactly how many volunteers were needed this year, or how many were initially planned for before the pandemic, only saying that the volunteer needs for this year’s tournament were “reduced.”

“Hockey Canada fully supports the IIHF decision to deliver the 2021 World Junior Championship in a bubble to ensure the health and safety of all participants and the community at large given the uncertainty of the COVID-19 pandemic.”

The pandemic and spectator-less bubble at this year’s event lead to a cascade of changes for future World Juniors.

Edmonton is slated to host again next year alongside Red Deer as was initially planned for this year’s event.

It’s hoped those who couldn’t volunteer this December will put their names forward again.

“It’s unfortunate that those who were eager to volunteer this year will have to wait for 2022, however we invite anyone who may have a desire to volunteer for the 2022 IIHF World Junior Championship to express their interest,” said Ehtier.

It’s an appeal Tate says she plans to take Hockey Canada up on.

“Absolutely,” she said when asked if she would be back for next year.