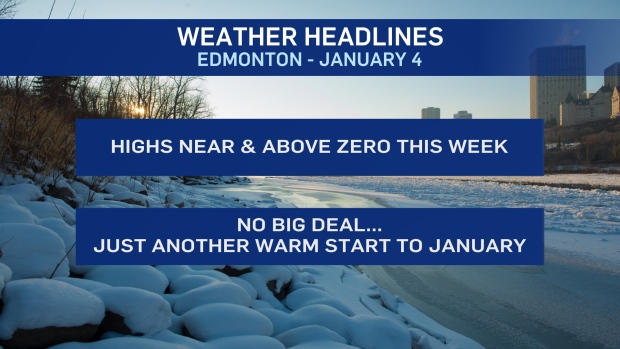 EDMONTON — December was 5 degrees warmer than average** in Edmonton and January’s off to the same start.

However, that’s not really “NEWS”.  We’re often quite warm in the first week of January.

More the short-term forecast in a moment.  First, take a look at THIS:

We’re forecasting SIX days above zero in this first week of January.

AND…in the past 20 years, Edmonton has AVERAGED 3 days above zero in the first week of January!

So, this warm start to the new year shouldn’t really come as a “surprise”.  In the past two decades, we’ve had just as many years with 5 days above zero in the first week as NO days above zero.(in both cases, five)

Daytime highs will be just slightly above zero today and Tuesday before climbing in the 5 degree range for Wednesday.

As for precipitation – not much chance of significant snow for the Edmonton area over the next 5 to 7 days.

HOWEVER, this IS a risk of some freezing rain/wet snow/rain-snow mix in the area tonight.

A low pressure system will slide across central AB tonight.  1 to 3 cm of snow is possible across parts of northern Alberta.

But, in areas from Edmonton south to the Rocky Mountain House/Red Deer region there will be some pockets of mixed precipitation and a chance of freezing rain.

Outside of that, it’s a pretty dry forecast for the next few days in and around Edmonton.

However, if you compare 2020 to older data, it was even further above the “normals”.