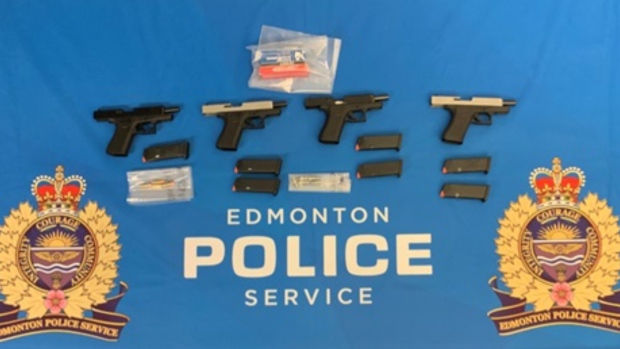 A Marty Wilson, 49, is accused of acting a “straw buyer.” The term is used by police to describe someone legally purchases guns and then sells them illegally.

In an operation described by police, Wilson left his home in Valleyview on Dec. 23 and drove to Edmonton where he bought four Glock 48 handguns.

Officers said he then picked up 27-year-old Daniel Graham and they went to an address in south Edmonton to meet Gabriel Adam, 28.

Police arrested Wilson and Graham hours later when they emerged from the home.

Inside their vehicle, officers say they found an original Glock box missing one of the recently purchased Glock 48 handguns and one of the two magazines it had originally contained. They also allegedly found three other boxes, each containing one Glock 48 and two magazines, and “small quantities” of cocaine and fentanyl.

Adam was later arrested, and police reportedly found a loaded Glock 48 recently bought by Wilson on the front seat of his car. They also allegedly found about $12,400 worth of cocaine, $25,000 worth of fentanyl, and $6,500 in cash.

Twelve non-restricted firearms were seized from a Valleyview home.

The previous year saw a marked increase in gun crime in Edmonton.

Sgt. Eric Stewart of the Edmonton Police Service’s firearms unit called straw purchasing one of the ways weapons end up on city streets.

“There are no jurisdictional boundaries to firearms trafficking, and we will be relentless in our pursuit of gun crime in our city and province. We will continue to hold those accountable who choose to commit gun crime, which contributes to the degradation of public safety.”