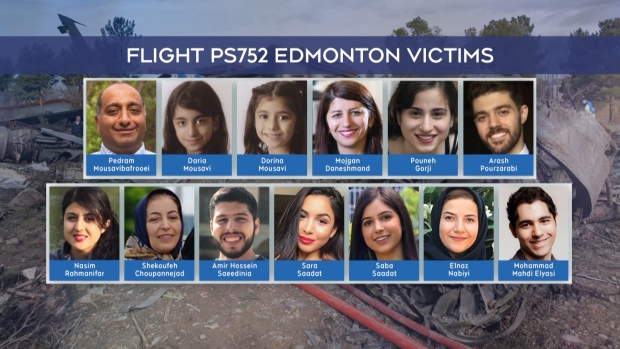 EDMONTON — A year has not lessened the grief nor questions of the families of 13 Edmontonians who were killed in a plane crash Jan. 8, 2020.

Of the 176 people on board the Ukrainian International Airlines flight PS752, 55 were Canadian. Thirteen victims were Edmontonians, including Soleimani’s wife Elnaz Nabiyi.

Everybody on board died when, shortly after takeoff from Tehran, the airplane was shot down with surface-to-air missiles fired by the Iranian revolutionary guard corps.

“I have no words, vocabulary, to put what has been the last year,” echoed Reza Akbari, an Iranian Canadian who was friends with another victim of the tragedy, U of A engineering student Nasim Rahmanifar.

Soleimani channeled his grief and rage into a documentary that chronicles his experience trying to recover and bury his wife’s body in Iran.

It also begins to fulfill what he feels is a “responsibility to do something” – an attempt to hold the Iranian regime accountable.

“Maybe my only motivation for the rest of my life is to discover the truth and bring justice.”

‘WE HAVE TO FIGHT FOR ACCOUNTABILITY’

Iran initially claimed the plane simply crashed, but in July its civil aviation organization released a report detailing how Iranian forces mistakenly thought the plane was a threat and fired on it without authorization.

Akbari recalled, “From the incident that I saw on the screen, I told my wife, ‘This is not a crash, they shot at the plane.'”

He believes there’s more to know yet.

“Why the second missile?” he asked. “Twenty-five seconds it took for the operator to make the second shot, while seeing that the plane was changing direction, coming back to airport.”

Akbari has moved from the president’s seat of Edmonton’s Iranian Heritage Society to a group of crash victims’ families seeking justice.

In search of answers about Nabiyi’s death, Soleimani has paused his PhD journey, which he had been earning alongside her. He says he couldn’t focus on anything else.

“This government is not a normal government, they are not (trustworthy) and there is no hope to cooperate with this regime.”

In December, former cabinet minister Ralph Goodale released a report of everything Canada knows about the crash.

The pandemic has left loved ones and community unable to gather on the first anniversary of the crash.

“These are the moments where the university community would very much like to get together to commemorate those who we’ve lost,” University of Alberta president Bill Flanagan said.

The post-secondary school’s community was cratered by the crash.

“The outpouring of grief was palpable,” recalled former U of A president David Turpin, speaking of the stretch of hours over which he learned his educators, students and alumni were among the dozens of victims.

Days later, the school jointly hosted a memorial for the victims, which was attended and watched online by tens of thousands of mourners.

“The tears, the grieving was something that I’ve never seen that intensity before,” he said.

“Each one of these individuals was an outstanding member of their community… Not only that, they were brilliant scholars and students making these incredible contributions in their fields.”

In the year since, the university has created an endowed scholarship fund in honour of the victims.

“This memorial fund, I think, is one way of taking our grief and our loss and focusing it in a way that will continue to open doors for people in the future,” Flanagan said.

The first award will be given to an Iranian student in the fall.

In December, Canada designated Jan. 8 of every year the “National Day of Remembrance for Victims of Air Disasters,” in part to commemorate the victims of Flight PS752.

On the one-year anniversary of the crash, the group PS752Justice streamed a candlelight vigil starting at 9:42 p.m. – the exact moment the Ukrainian International Airlines flight took off.