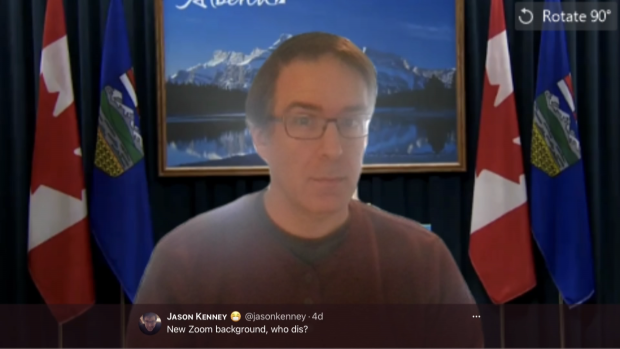 EDMONTON — Jason Kenney is in the United States sending out tweets about his cabinet; not Alberta premier Jason Kenney, but a man who shares the same name and is renovating his kitchen.

“Someone said that I have to do something about my cabinet and I was conveniently changing the hardware on the cabinets in my house, and so I said, ‘I’m working on my cabinet,’” says Jason Kenney, who lives in Virginia.

The American Jason Kenney is a self-described news, political and social media junkie but thanks to his name, he’s now tuned into Alberta politics as well

“I’m not as enlightened as I probably could be but I’ve come a long way.”

“There’s the stereotypes that Canadians are all polite and apologetic and peaceful which is largely true, but boy, when you get into politics it can be just as divisive and hot as it is down here too,” says Kenney.

But instead of fueling the flames, Kenney tries to have fun with his mistaken identity.

“Maybe it makes some folks take a step back and simmer down a little bit,” he says. “Because I’ve been able to be a good sport about it because folks I’ve engaged with have also been good sports about it.”

And Kenney, who has had his twitter account @jasonkenney since 2007 , says he has no plans to step back and change his name on social media.

“If I changed it no one would drag me into Canadian politics anymore,” he said. “I’d be lost in the wilderness.”