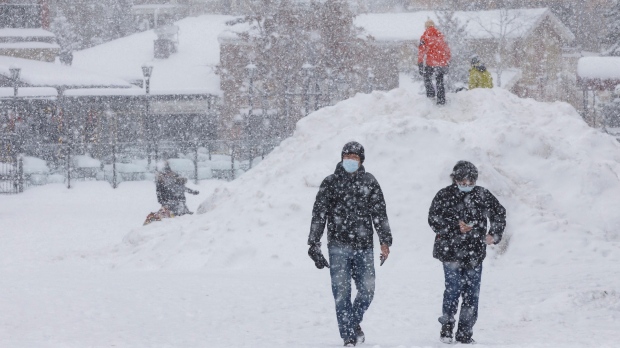 TORONTO — A sudden warming event above the North Pole has the potential to force a polar vortex towards Canada, bringing bitterly cold temperatures and heavy snow, according to one expert.

A polar vortex is a low pressure system that spins cold air in high altitudes of the planet’s polar regions. The vortex is an area of cold air that can be agitated or displaced and then forced into lower atmospheric levels in other locations.

It’s not guaranteed that the current stratospheric warming will produce a polar vortex. Philips says it’s almost impossible to predict where a vortex will land and for how long it will stay, although there are some indicators.

“It’s not a sure thing that it’s going to happen. I’ve looked at our models and it looks like in the fourth week of January we will begin to see cold air plunging down from Manitoba to Quebec and into the Maritimes. In the Prairies it will be generally normal,” said Philips.

“There’s nothing guaranteed with weather and it’s not often well understood to give us a precise forecast.”

If a polar vortex is triggered, it could make its way through the southern parts of Canada, according to Philips. Most of Canada has experienced a generally mild winter, which Philips attributes to a warm jet stream.

“One of the indicators is the jet stream – a river of air that blows from west to east – that has been flooding Canada with a lot of Pacific air and southerly air. It acts as a fence to the vortex, keeping it in the north,” said Philips.

The Pacific jet moves all the way across the Prairies and into Atlantic Canada, making people feel like it’s warmer than it actually should be. Sometimes the jet stream changes its orientation, which disrupts northern and forces the polar vortex south.

The polar vortex is always active but it doesn’t always get disturbed. When it does, the vortex begins to weaken and mix with southerly air from the United States, Philips explains that’s when it will bring messy weather.

Should the weather event occur, Philips predicts it will last for two weeks, and will arrive near the end of January and continue into February. Once the jet stream corrects its projection, the polar vortex will return back north.

“The end of January is when we typically reach our coldest temperatures across the southern part of Canada. The good news is that it means winter will be half over by the time it’s here,” he said.

Philips says most Canadians should expect the second half of winter to be colder than the first half. He also urges Canadians to be optimistic, because by the time the vortex is expected to arrive, people will have already made it halfway through winter.