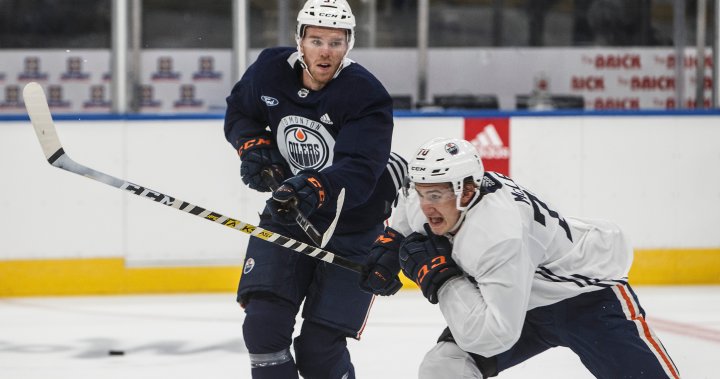 The Edmonton Oilers roster is starting to take shape with the season opener on Wednesday night against the Vancouver Canucks.

At practice at Rogers Place on Monday, the forward lines were:

McLeod, 21, skated as the fourth line centre and appears poised to make his NHL debut. He was drafted 40th overall in 2018.

“We’ve still got lots of tinkering to do yet, so I wouldn’t anoint anyone in there yet. He’s a young player who’s getting closer,” said head coach Dave Tippett. “He’s got the size. He’s got the skill. He’s starting to understand what he needs to do, his role on the team.”

McLeod had a strong training camp in the fall of 2019. He went on to play 56 games in the AHL with the Bakersfield Condors, grabbing 22 points.

“After training camp, they kind of told me the things to work on to make the jump to the NHL,” said McLeod. “They sent me down to Bakersfield and I had a learning year under (head coach) Jay Woodcroft. He helped me out a lot. I went over to Switzerland. I learned a lot there, too.”

McLeod was in Switzerland for the start of this season with Zug EV. He had 11 points in 15 games.

“It made me play a lot harder, work on the small areas in the D Zone,” said McLeod. “It was nice to work on that kind of stuff in a game.”

“He’s a guy just getting better and better. Last training camp was a coming out party for him. He looked really good,” said captain Connor McDavid. “He’s a happy kid, brings a lot of positive energy.”

“There are details in his game that the maturity helps with,” added Tippett. “He reads that on defence he has to stop on pucks, be competitive, knowing the structure of how you want to play. His face-off stuff has gotten better.”

On Monday, the Oilers placed forwards Jujhar Khaira, Patrick Russell, Joakim Nygard and Alan Quine on waivers. The most notable of that group is Khaira, who has been with the Oilers for the last three seasons.

“If he doesn’t get claimed, he’s still on our team, so we can use him wherever we want to use him,” said Tippett. “We hope we don’t lose anybody, but it’s a very unique time. With the taxi squad and the salary cap, there are a lot of factors that come into play.”