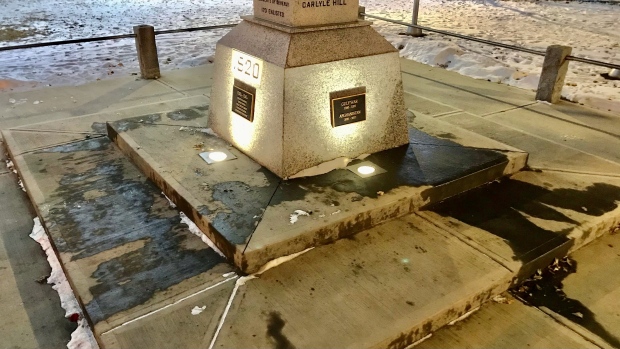 EDMONTON — A group of local veterans is expressing frustration and sadness – after reporting that a 100-year-old cenotaph in northeast Edmonton was vandalized for the fourth time in two months.

The Beverly Memorial Cenotaph on 118 Avenue and 40 Street was built in 1920 to honour local soldiers who died in the First World War. Tributes to other fallen soldiers have been added since then.

But starting Remembrance Day 2020, the cenotaph has been spray painted, written on with nail polish and smeared with cake, it’s caretakers said.

Last weekend an oily substance of some sort was dumped around the base, staining the concrete.

“I’m pretty ticked off. This is just not right what people are doing, we consider this sacred ground,” Joe Luce with the Beverly Memorial Cenotaph Committee said Monday.

A veteran himself, Luce said he’s spent hundreds of hours over the years cleaning up the park that surrounds the memorial.

He alleges vandals have spray painted benches, stolen garbage bins and ripped Christmas lights out of the trees.

But targeting the cenotaph is a new level of cruel, he said.

“It’s quite surprising because no one has ever touched it before, out of all my years,” Luce said.

“There is plenty of vandalism all over the city, especially lately, but this park is not meant to be treated as such. I just wish people, if they’re needing help, go get help, because this is just not right.”

Luce said the vandalism has been reported to the Beverly Business Association that works with the City of Edmonton to maintain the park.

He believes those groups will report the latest incidents to police – and is hoping security cameras will be installed in the area – because the cenotaph should be protected, he said.

“It’s important for people to remember the sacrifices that our servicemen did and never came home, this is important to be here,” Luce said.

A group of local veterans is willing to work with the city to clean this latest vandalism on the cenotaph, Luce said.

He’s hoping residents in the area will keep an eye on the park and help police catch the vandal(s).