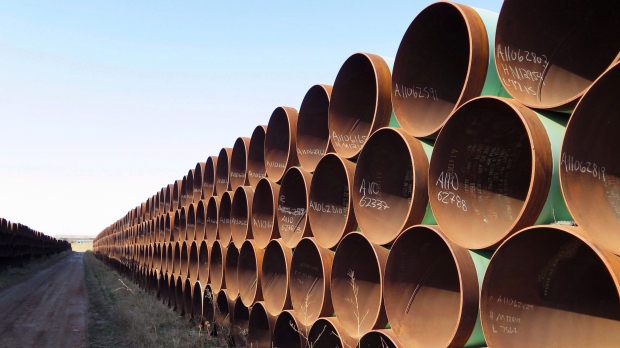 TORONTO — A source close to the transition team of U.S. President-elect Joe Biden has told CTV News that the new president will kill the Keystone XL pipeline after taking office.

According to the transition briefing documents, reviewed by CTV News’ Washington Bureau Correspondent Richard Madan, the plan to use an executive order is listed under Wednesday, Jan.20, his first day of office.

The Keystone XL pipeline extension is a controversial cross-border project that seeks to build upon existing infrastructure transporting Canadian crude oil into the U.S. It aims to deliver 830,000 barrels of oil from Hardisty, Alta. to Steele City, Neb., and would cost approximately US$8 billion.

Biden’s election campaign has been open about his intention to dissolve the TC Energy’s Keystone deal since May, when he was running to be the Democratic candidate.

The move is part of his promise to roll back actions U.S. President Donald Trump made while in office that stripped environmental protections. Biden has also promised that the U.S. will be rejoining the Paris Accord, which Trump withdrew the country from in 2017.

A Canadian source close to the matter told Madan that Prime Minister Justin Trudeau brought up the subject in a congratulatory phone call with Biden following his victory in the U.S. election.

They spoke for around 10 minutes, the source said, and agreed to continue discussing later down the road.

In an emailed statement Sunday, Kirsten Hillman, Canada’s ambassador to the U.S., told CTV News that the Canadian government still stands by the project, and that “Keystone XL fits within Canada’s climate plan.”

“The government has announced a strengthened climate plan with $15 billion in investments to build a cleaner, more resilient economy, and exceed our current 2030 GHG reduction target,” she wrote. “We are also legislating Canada’s goal of net-zero emissions by 2050.

“Underpinned by a crucial and longstanding trade and security partnership, there is no better partner for the U.S. on climate action than Canada as we work together for green transition.”

The statement did not comment on Biden’s promise to end the deal.

The Keystone XL pipeline extension has sparked protests from climate and Indigenous groups on both sides of the border. Activists have expressed fears of gas leaks injuring wildlife and potentially poisoning water sources.

In 2019, the existing Keystone pipeline suffered a leak in eastern North Dakota, spilling 1.4 million litres of oil and impacting more than 19,000 square metres of land.

Critics of the project have also pointed out that sinking more time and money into oil in a time when the world is looking to move away from it makes little economic sense, particularly in the face of plummeting oil prices.

The project was vetoed by former U.S. President Barack Obama in 2015, citing environmental concerns — but shortly after taking office in 2017, Trump reversed course and signed an executive order to allow the pipeline.

Construction began on the project in Alberta this summer, and was set to be completed by 2023. The project promised 2,000 construction jobs to Albertans.

Premier Jason Kenney has been a consistent supporter of the project, saying in July that if Biden cancelled the project, it would be a “terrible blow” to the Canada-U.S. trading relationship.

Kenney said Sunday in an emailed statement that he was “deeply concerned by reports” that Biden was set to cancel the deal.

“As the Government of Canada has said, building Keystone XL is ‘top of the agenda’ with the incoming Biden administration,” Kenney wrote. “Prime Minister Trudeau raised the issue with President-elect Biden on their November 9, 2020 telephone meeting, agreeing to engage on key issues, including … [sic] energy cooperation such as Keystone XL.

“We renew our call on the incoming administration to show respect for Canada as the United States’ most important trading partner and strategic ally by keeping that commitment to engage, and to allow Canada to make the case for strengthening cooperation on energy, the environment, and the economy through this project.”

He added that he believes it would be a blow to the economy on both sides of the border due to the job loss and that Canada shares its commitment to “environmental stewardship [and] combatting climate change.”