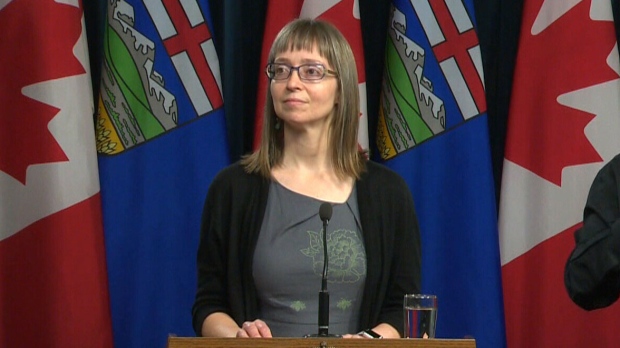 EDMONTON — Alberta reported 456 new COVID-19 cases on Tuesday, the lowest it had since Oct. 28.

The lab system conducted some 8,200 tests the day before, leaving its provincial positivity rate sitting at 5.6 per cent.

A day earlier, it had rung in at 5.4 per cent, significant lower than it had been weeks ago.

“Our positivity rate is declining, but it is still far above the one to three per cent that we saw for most of the summer and fall,” commented Chief Medical Officer of Health Dr. Deena Hinshaw.

“The numbers fluctuate on a daily basis, but we continue to see an overall decline in our testing numbers from last month. We don’t know all the reasons for this, but one factor could be fewer people getting sick,” she explained, urging anyone showing symptoms to book a test.

After the past week, Alberta’s provincewide R (reproductive) value sits at 0.84. The rate of transmission is slightly lower in the Edmonton and Calgary medical zones – 0.81 and 0.79, respectively – and slightly higher outside of those areas – 0.88.

Seven hundred and forty Albertans are in hospital with COVID-19, 119 of whom are in ICUs.

Hinshaw said there were 147 schools – about six per cent of all schools in the province – on alert, and two schools with outbreaks.

Chief Medical Officer of Health Dr. Deena Hinshaw will give an update Tuesday on the “progress” Alberta is making with its COVID-19 numbers.

A day earlier, the province’s top doctor called decreasing hospitalization and infection numbers a “testament of the hard work and sacrifices” of Albertans but said “we’re not out of the woods yet.”

Its premier, Jason Kenney, said he expected Alberta’s supply to run out Tuesday.

Another shipment of Pfizer vaccine isn’t expected until later in the week, so the province is pausing scheduling appointments for first doses.

Kenney said he was confident Alberta would have enough supply to administer second doses on time.

Hinshaw is scheduled to speak Tuesday at 3:30 p.m. MST.