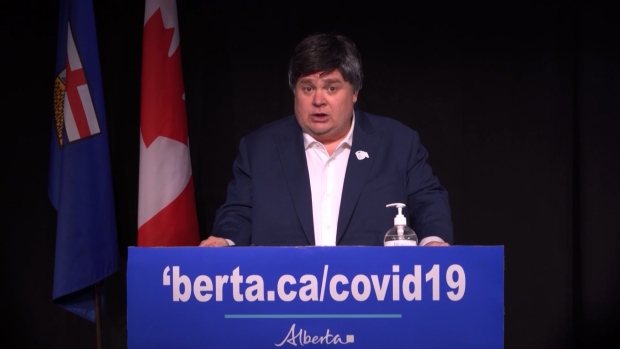 EDMONTON — A theatre in Edmonton is getting a lot of attention online for its politics – or, rather, its lampooning of politicians.

The Grindstone Theatre is getting tens of thousands of views of its parody videos poking fun at the press conferences being held by Premier Jason Kenney.

“It’s been interesting to kind of just see a couple things unravel, so we have to jump on what’s hot right now,” said Johnson.

“It’s starting to take off a little bit,” says Johnson.

Donovan Workun, who plays Kenney in the videos, says the time is ripe for political satire.

“When people get outraged or people are really happy that’s when it’s the easiest to lampoon some things.”

Workun says it was tough to do an impression of Kenney at first.

“I think the key to the Jason Kenney impersonation is not knowing what you’re going to say until you’re actually saying it.”

Johnson says having politicians keep talking is all he needs to keep writing scripts for the comedy videos.

“Sometimes there’s a couple of people who say things and you’re like, I don’t think you know what you’re saying but we’re definitely going to be pulling on that.”

The videos keep pulling in so many viewers that they intend to keep making more and Workun says he hopes they catch the attention of the premier.

But Johnson says Kenney might not be the only politician getting satirized in their videos.