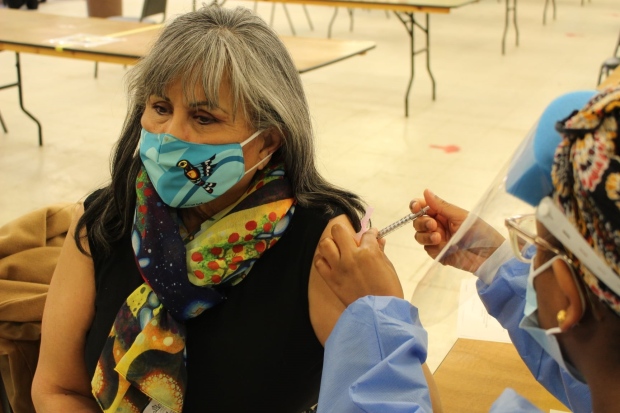 EDMONTON — Chief Vernon Saddleback describes it as the light at end of the tunnel.

He’s the chief of one of four Alberta First Nations that make up Maskwacis south of Edmonton.

Last weekend, Maskwacis received a shipment of 500 COVID-19 vaccines to administer to Indigenous elders and other vulnerable members of the community.

“When you see our first elder getting vaccinated, I see the end coming to this pandemic, I see social isolation ending. It’s very much a joy moment for me and I can’t express how grateful I feel,” Chief Saddleback told CTV News Edmonton.

Maskwacis has seen a surge in COVID-19 cases in recent weeks, at one point hitting nearly 600 active cases in a community of about 18,000.

“I was there for the first one. It was one of our elderly ladies was one of our first vaccinations and, you know, I was just – I can’t explain just how touched I was to see our first one come to the community. I know a whole lot of other communities are waiting for this,” said Chief Saddleback.

Other Alberta First Nations were also expecting to get vaccines soon but international supply issues have hampered those efforts.

“Unfortunately, due to delays caused by the vaccine manufacturer and a lack of supply from the Federal government, the rollout to First Nations communities has been delayed,” said Minister of Indigenous Relations Rick Wilson in a statement this week.

“We renew our call on the Federal government to speed up the process of providing vaccines. Canada is now receiving less vaccines than other countries. This is not acceptable.”

Wilson explained Maskwacis received a “limited number of doses” on an emergency basis to deal with “a large outbreak.”

“We want to lower our numbers because we want the whole region to be safe,” said Chief Saddleback, who told CTV News some Maskwacis residents have had trouble accessing services like haircuts in surrounding communities.

“For me, it’s not racism, that’s just people trying to be safe. You don’t want to catch the virus exploding in one community,” he said.

Maskwacis Health Services contributes the recent rise in cases to spread in large households and at funerals and wakes.

“Our normal mortality rate is we lose about 52 people a year and in the 11 months since we locked down in March, and we’ve still got one more month to go right, before it’s been a full year, we’ve lost 83 in our community. This pandemic has stressed everyone.”

The chief said the fatalities range from heart attacks to suicides and he’s hopeful the vaccination roll out will start bringing down case numbers and improve residents’ mental health.

“We lost another person to COVID yesterday and you know it wears on your soul to keep hearing about them,” said Chief Saddleback. “So on schedule, on time, words fail me how grateful I am that it’s in our community.”