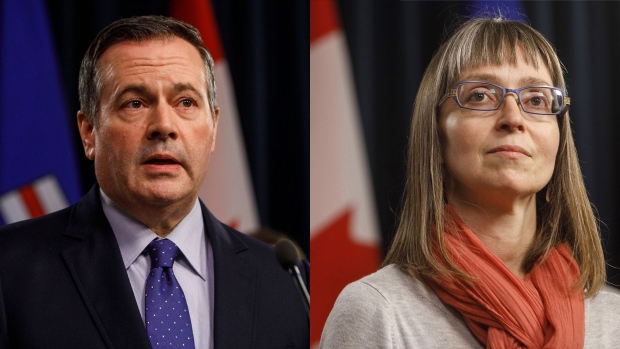 EDMONTON — There is no sign COVID-19 restrictions will be eased in Alberta, even as the province reaches two weeks on an extension of regulations it put in place before the holidays.

When Premier Jason Kenney announced the rules prohibiting all indoor social gatherings and mandating masks in indoor public spaces would be in place longer, he specifically said “until at least Jan. 21.”

However, the messaging in the days leading up to Thursday from Alberta’s officials has been that it’s too soon to relax public health orders.

Kenney told Calgary radio station Red 106.7 there was “no news” on when rules would be eased given the new, more contagious variants of COVID-19.

“We are going to wait and see the impact of opening the schools – that’s 720,000 people who are now together – and we have we just reopened personal services, expanded the numbers of people who can attend funerals and permitted small outdoor social gatherings,” he said in the Thursday morning interview. “So, those are initial steps and we’ll take more when it’s safe to do so.”

According to the latest data, the province has 10,565 active cases and a positivity rate of 4.5 per cent – down from 5.6 and 5.4 on Monday and Tuesday. More than 95,000 vaccine doses have been administered.

One hundred twenty-four Albertans, out of a total 744 who are hospitalized, are in ICUs.

In recent daily COVID-19 updates, her messaging has been aligned with the premier’s.

“It’s natural to want to get back to all the things that we’ve missed during the last six weeks,” Hinshaw said Tuesday. “However, our health system is still under severe strain.”

On Wednesday, she called the decline of Alberta’s provincial positivity rate encouraging and likely due to restrictions put in place in November and December – but said it was “critical at this point [to] maintain enough measures to continue going down.”

And, the “at least until Jan. 21” wording on Alberta.ca appeared to have been changed Jan. 15 to read, “All other mandatory restrictions will remain in place until further notice.” The update was made a day after some rules for outdoor gatherings and funerals were relaxed.

Hinshaw is scheduled to speak alone during Thursday’s pandemic briefing.

Watch the news conference live at 3:30 p.m. MST on CTVNewsEdmonton.ca.