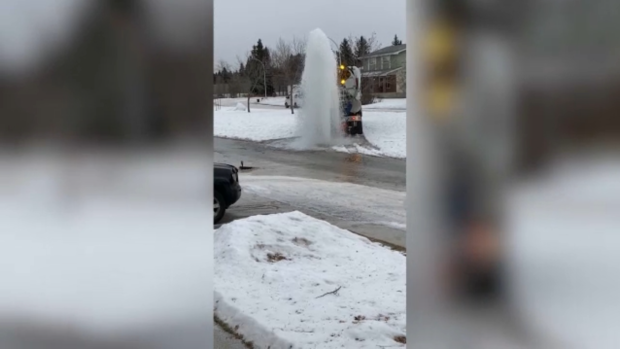 EDMONTON — City crews mopped up a flood of water in southwest Edmonton on Thursday afternoon after a truck reportedly hit a fire hydrant.

It happened around noon in the Brander Gardens neighbourhood.

A neighbour tells CTV News Edmonton he saw a hydrovac truck pull up on his street, and moments later he saw a geyser of water more than 15 feet tall spouting above the truck.

He said the geyser could be seen for about 20 minutes with water traveling both directions down the street before city crews were able to shut it off.

Cleanup of the neighbourhood took about an hour.

The city also brought in equipment to scrape up the ice that resulted from the geyser, and sanded the street.