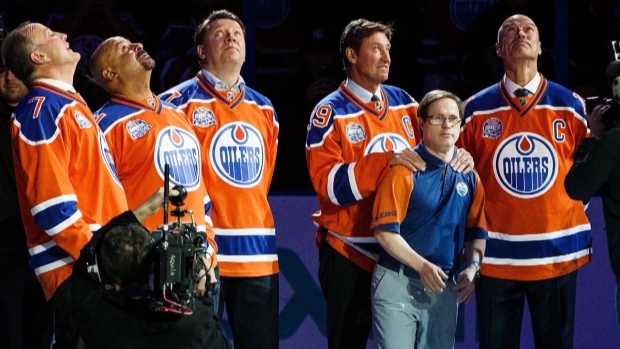 EDMONTON — Joey Moss’ effect on the city of Edmonton continues to be felt as citizens explore new and creative ways to honour the local legend, including carving sculptures and renaming landmarks.

Ryan Villiers is a local wood carver who is just putting the finishing touches on a bust of Moss. Like many, he thought that the long time Edmonton Oiler deserved another way to be remembered.

“He deserved it. I had this feeling that came over me and I thought it should be done to honour him.”

Villiers plans to sell the piece once it’s complete, and wants to see it go to the right place.

“Hopefully somebody can get their hands on it and take it to the right plac,e and have money raised for it and all proceeds go to whatever organization or benefit in Joey’s name.”

The creative labor of love is not the only way Edmontonians are trying to ensure a lasting legacy for Moss. Petitions continue to circulate encouraging the city to rename different landmarks after the locker room attendant.

Dan Gallant from Oilers Nation has spearheaded a movement to rename the High Level Bridge after Joey as a way to embrace his legacy.

“There’s a ton of ideas out there but it’s just kind of something to get us thinking and getting us still talking about it because it feels like we haven’t done enough yet for him and I don’t know if anything will be enough.”

The petition currently has around 1,000 signatures. Gallant had hoped that 10,000 signatures would get the attention of city council. Don Iveson’s office released a statement on the idea on Friday.

“While the Mayor understands people’s desires to find a way to honour Joey’s impressive legacy, it is our understanding that OEG is already working with Joey’s family on some very thoughtful ways to honour Joey. We want to be respectful of the family’s wishes, so we’ll wait until we see their proposals before we comment further,” said spokesperson Nathalie Batres.

Edmonton’s Downtown Community Arena has also garnered a lot of attention as a possible candidate to honour Joey Moss. A petition started shortly after his death has gained nearly 15,000 signatures to see the rink’s name be changed to the Joey Moss Community Arena.