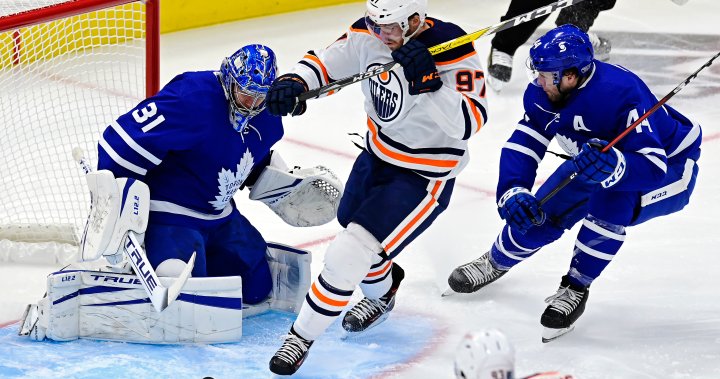 The Edmonton Oilers had to settle for a split in Toronto after falling 4-2 to the Maple Leafs on Friday night.

Oilers captain Connor McDavid had the best chance in a scoreless first period. He found a rebound in front and flipped a backhand on goal, but Leafs goaltender Freddie Andersen made a glove save.

The teams traded goals with Edmonton forward Kyle Turris serving a penalty early in the second.

The Oilers’ Leon Draisaitl stole the puck down low and tucked a shot inside the post for his second of the year. Late in the power play, Toronto’s Adam Brooks scored his first NHL goal when a cross slot pass hit him and went past Edmonton netminder Mikko Koskinen.

McDavid evened it up 50 seconds into the third with a deflection of Ethan Bear’s point shot. Toronto forward John Tavares came back with a tip-in goal on the power play with 8:14 left.

The Oilers applied pressure in the final few minutes, but Leafs forward Mitch Marner added an empty-net goal just before the clock expired.

The Oilers will visit the Winnipeg Jets on Sunday.