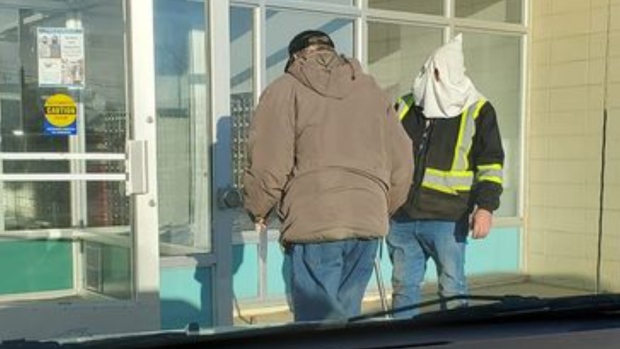 EDMONTON — Two-and-a-half weeks after a photo of a person wearing a white hood at the Grimshaw, Alta., post office surfaced on social media, police say they believe they have identified the person in the photo.

The photo showed a man wearing what looked like a white hood with eye holes and a pointed top, similar to ones worn by members of the Ku Klux Klan.

“On Jan. 8, 2021, at approximately 6:15 p.m., Peace Regional RCMP received a complaint that an individual was wearing a head covering that resembled a ‘Ku Klux Klan’ style hood at the Grimshaw Post Office earlier that afternoon,” an RCMP release sent Monday said.

According to the release, police have seen the photo posted to social media. They believe they have identified the person in the photo, and are working with the office of the crown prosecutor for review and opinion.

Grimshaw’s mayor said on Jan. 9 that he was disheartened by the incident.

“In no way shape or form does the town of Grimshaw, or its residents, find that kind of situation appropriate,” said Bob Regal.

“Nor do we condone or the insinuation that the community is racist based on the comments of a few people.”

He said at that time that he did not know the person’s identity.

Grimshaw is located about 500 kilometres northwest of Edmonton and has a population of about 2,700, according to the mayor.