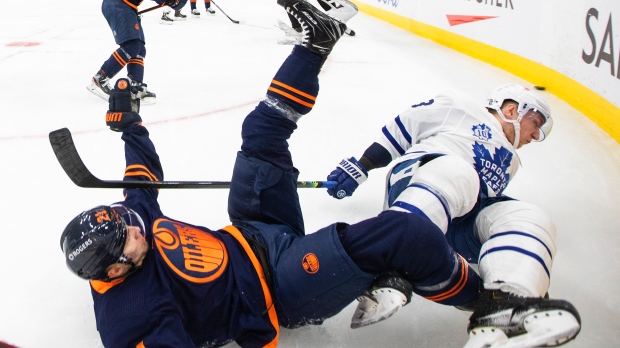 TORONTO — The Toronto Maple Leafs will be going for a four-game Western Canada sweep Saturday night when they complete a two-game set against the host Edmonton Oilers.

The Oilers are 1-3-0 since defeating the Maple Leafs in Toronto on Jan. 20.

“It sounds so cliche but all areas need to be riding together and that hasn’t happened for us yet.”

Leon Draisaitl had two goals for Edmonton on Thursday. He has scored in five straight games and has six goals.

The Oilers twice tied the game Thursday after the Maple Leafs took a 2-0 lead. Auston Matthews scored the winning goal on a power play at 13:37 of the third period.

The Leafs will be trying to stretch their overall winning streak to five games.

After defeating the Oilers in Toronto on Jan. 22, the Maple Leafs won twice over the Flames in Calgary.

“I like the way that we’ve found ways to come out on the positive side of it when it counts the most,” Maple Leafs coach Sheldon Keefe said.

“We gave up the lead and then we bounce right back and get it and then make sure we finish the job. That’s been a theme. I like that.”

“That’s what bothers me. We’re making mistakes that are taking away from our chance to win. It feels at times we’ve played better than our record, but we’ve got that record because we’ve brought a lot of that trouble on ourselves.”

The Oilers and Maple Leafs get underway tonight at 5 p.m. MT.