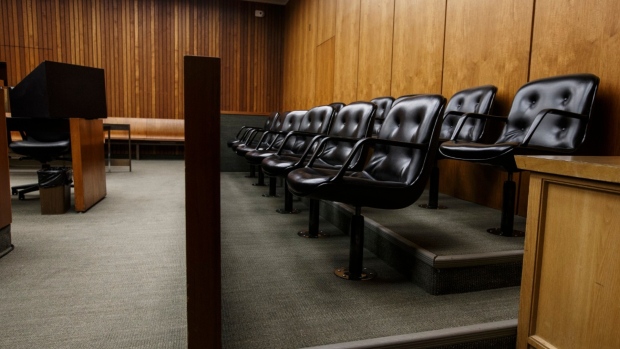 EDMONTON — An Ontario man accused of killing a woman who was found soaked in blood in an Edmonton hotel bathtub is expected to take the witness stand today.

Bradley Barton, who is 52, has pleaded not guilty to manslaughter in the death of Cindy Gladue.

The body of the 36-year-old Metis and Cree mother was discovered in a room at the Yellowhead Inn on June 22, 2011.

A jury has heard that Barton, who was working at the time as a long-distance furniture mover, had been drinking with Gladue the night before.

Security footage shown during the trial shows the two going to Barton’s hotel room together.

Medical experts have testified that Gladue suffered from a severe wound to her vagina and bled to death.

This is the second trial for Barton in relation to Gladue’s death. Following his first trial in 2015, which sparked rallies and calls for justice for Indigenous women, the case ended up before the Supreme Court of Canada. It ordered in 2019 that Barton be retried.

Crown prosecutors concluded their case last week, and the defence said it will begin Monday and Barton will be testifying.

GRAPHIC WARNING: The following details may disturb some readers.

A gynecologist and a medical examiner previously told the jury that Gladue suffered an 11-centimetre tear to her vaginal wall, and it was like nothing they had seen before in their years of works.

Dr. Erin Bader, who works at Edmonton’s Royal Alexandra Hospital, testified that the wound was due to excessive force.

On Thursday, Crown prosecutor Lawrence Van Dyke read evidence from a forensic computer analyst who reviewed the search history on Barton’s laptop up to nine days before Gladue was found dead.

There were 191 entries, Van Dyke said, and they included searches and links to videos of vaginas being torn or ripped by large objects.

There were also searches about how long a woman’s vagina stays stretched after childbirth and videos showing up a woman’s skirt.

Justice Stephen Hillier warned the jury they should not make their final decisions based on character, even if Barton’s search history gives them a poor impression.

This report by The Canadian Press was first published Feb. 1, 2021.