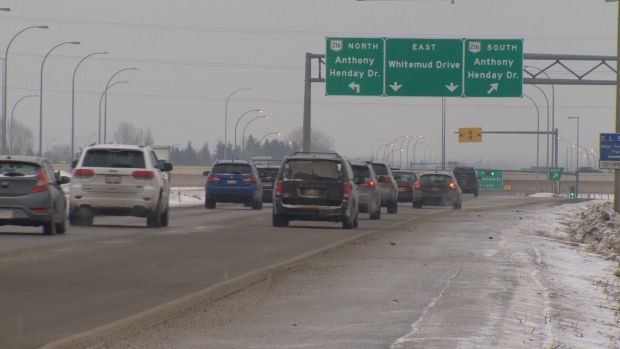 EDMONTON — The suggestion that Edmonton might one day introduce toll roads, drastically hike parking fees, or charge drivers per mile to encourage transit use was denounced as “radical and dangerous” by a city councillor Monday.

Those are just some of the options that could intentionally “double the costs associated with operating a car,” outlined in a report set to be reviewed by the city’s Urban Planning Committee on Tuesday.

“It’s radical and it is dangerous, especially with years of economic recovery ahead of us. I have no idea what a congestion tax is, but I’m sure it will cost you a lot of money,” Councillor Mike Nickel said in a statement.

“People in this city are just trying to make ends meet, but one cannot help but think City Hall doesn’t care about us,” Nickel, who is also running for mayor, added.

Nickel was not available for an interview Monday night – but he tweeted the report and said there’s a “war on cars” in Edmonton.

The report is part of a new city plan that was approved on Dec. 7.

Part of that plan looks at options to reduce the number of people who use a car for all daily trips from 78 per cent to 50 per cent in the next 10 years.

Councillor Andrew Knack, who is also considering a run for mayor, said he supports the effort to get to 30 per cent transit and 20 per cent walking and cycling over the next decade.

But, he said that will take time, and a major effort in infrastructure and communications from the city.

“My first reaction is not to making driving harder, it’s making the other options much better. Because let’s be honest, using transit isn’t exceptional in this city’” Knack said.

“There are cities like Vancouver that has 40 per cent of their residents using transit. Why? Because their transit system is excellent.”

Knack – who has a car and also cycles to work – said the suggestion there’s a “war on cars” in Edmonton just isn’t true.

“We’ve never spent more per year on roads than we have the last five years. We’ve spent approximately $250 million a year on roads and that’s not including the Yellowhead or the Terwillegar Expressway,” Knack pointed out.

Knack said he’s not against the report because Edmonton “can’t be scared” to consider new ideas to become more sustainable.

Nickel ended his written statement suggesting this will become a major election issue leading up to a new mayor taking over in October.

“Edmonton has to make a choice. Get ready to vote,” he wrote.

The Edmonton Urban Planning Committee meets Tuesday at 9:30 a.m. and that can be viewed online.