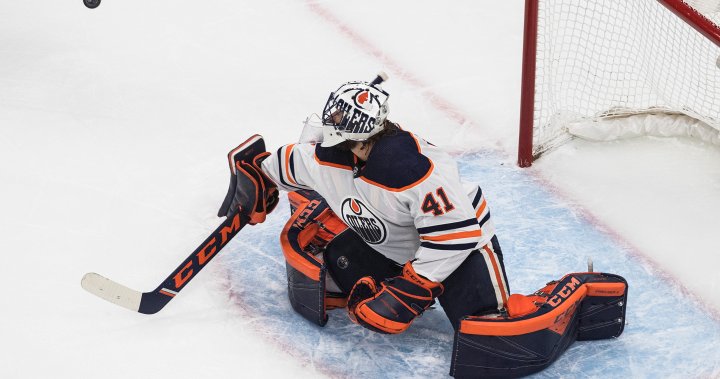 Goaltender Mike Smith will make his first start of the season Monday night when the Edmonton Oilers visit the Ottawa Senators.

“I feel great. I’m excited. You never want to start a season with an injury.

“It was kind of a freak thing and unfortunate,” said Smith.

“My injury was kind of a weird one. It only affected me in certain movements. I was able to do a lot of things I was able to in the summer and preparing for the season. It didn’t set me back too much.”

With Smith out, Mikko Koskinen started 12 of 13 games.

“Kosky played well for us. We put a guy in a tough situation, playing that many minutes early in a season without any training camp,” said head coach Dave Tippett.

“I think both of our goaltenders played better last year when they were going two-and-two at the start of the year.

“They both were fresh. They both played well. I’d like to get back to a little rhythm of both of them.”

Defenceman Ethan Bear will miss his fourth game since getting hit by a puck on the bench during a game against Toronto. Tippett didn’t reveal any other details about the lineup.

The Oilers, 6-7, beat the Senators in two games at Rogers Place last week.