EDMONTON — Although some Edmonton athletics organizations were caught off guard by a sudden rollback of restrictions on youth sports, they’re wasting no time starting up their activities once again.

“It was a surprise,” the general manager for Hockey Edmonton, Steve Hogle, told CTV News Edmonton. “A good surprise, but a surprise nonetheless.”

“We’ve been in high gear ever since.”

The announcement from the province came just days after Hockey Alberta said it would throw in the towel on the 2020-21 season.

The reconsideration on group activities comes with new precautions, including no spectators, minimal use of change rooms and distancing of three meters inside, or two meters outside.

“I understand that that is inconvenient and in some cases expensive for those organizations that have made those choices,” she said. “I’m sorry for that.”

“What we have tried to do all along throughout this pandemic is to again balance those different considerations of making sure that we’re minimizing the impacts of COVID and at the same time the impacts of restrictions.”

The new provincial guidelines allow a maximum of 10 people to participate at once, including trainers and coaches.

Teams are able to practice, but still no games can be played.

“What we’re planning is for each team to use 1.5 hours of ice per slot,” said Hogle. “Usually they go out for an hour of ice time for practice. Now it’s going to be 1.5 hours split in half. So half the team can go to a maximum of 10 for 45 minutes and then the other half of the team goes on the back half of that ice time.”

Hogle says that’s the plan for all players moving forward with the exception of the youngest.

“It doesn’t make sense for those little guys — 10 at the most — to be chasing a puck on a full sheet of ice,” he said. “They’re not part of this plan. Hopefully we can ramp it up and have more people on the ice and we can include them at that point.”

The Hockey Edmonton GM is still hopeful that this latest announcement leads to even more relaxed rules and even more hockey in the weeks to come.

“We want to have a plan in place where we can scale it up if we’re allowed more people on the ice,” he said. “If they introduce, ‘Contact is OK,’ we wanna be able to adopt that as well.”

“All the plans are scalable, depending on the health measures of the day.”

Some teams with access to privately run arenas were already hitting the ice Monday afternoon.

With municipal arenas still closed to the public, Hogle says Hockey Edmonton is working with the city in an effort to get open them as quickly as possible.

“They are putting a plan in place,” he said. “And that will go to council Wednesday.”

Hogle says he’s hopeful those city rinks will be open by next week.

Hockey Edmonton provides minor hockey to 10,000 kids and teens across the city. 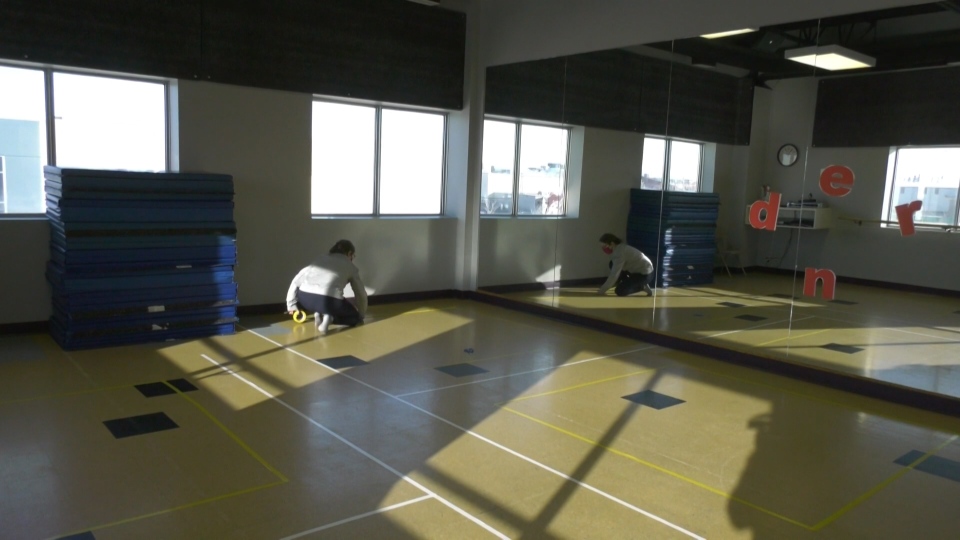 “Today we’re re-taping our floors with correct distancing markers to comply with the new three-meter regulations, so we can make sure that we keep our kids 3 meters apart at all times.”

Snow says the last provincial lockdown caused the dance studio to be closed since Nov. 15, as well as three months last spring.

“It’s been tough,” she said. “We were closed for a very long time.”

The studio normally only operates from September to June.

The dance studio is now opening its doors to its students, aged three to eight, Monday afternoon.

The in-person lessons, Snow says, much more beneficial to the students than learning remotely.

“The atmosphere of being able to feed off of anybody else in the room, feeling the energy in the room, that’s why we do it in person.”

Like the minor hockey association, the dance studio hopes the possibility of live competitions is still to come in the weeks or months ahead.

“We’re very happy to have our students back in the studio,” said Snow. “That’s step one and we’ll see what happens after that.”