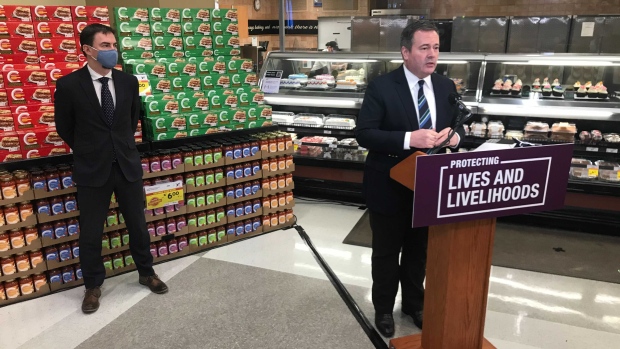 The province said the critical worker benefit will be available to health care, social services, education and private sector workers “who deliver critical services to Albertans or support food and medical supply chains.”

“It’s a sign of appreciation for the people whose hard work makes life easier for the rest of us during a really tough time,” said Alberta Premier Jason Kenney at a news conference at Edmonton’s Belmont Sobeys.

Ottawa is providing three-quarters of the money with the province covering the rest.

Eligible health care workers include respiratory therapists and technologists, nurses and food services, housekeeping and maintenance workers, among others.

Some of the eligible occupations in the social services sector include family and youth counsellors, home support workers and crisis intervention and shelter workers.

Those who can access the money in the education sector include teacher assistants, bus drivers and cleaning staff, among others.

As well, private sector workers who make less than a $25 hourly wage — like grocery store staff, private health workers such as dental assistants, and truckers — are eligible.

“Front-line staff in designated fields can get the benefit if they worked at least 300 hours during the eligible time frame, which runs from Oct. 20 of last year to Jan. 31 of this year,” Kenney said.

“If they’re in the Government of Alberta system they’ll automatically receive the money from the provincial government.”

In a news release, Alberta’s largest union said it welcomes the news but the gesture “rings hollow.”

In May, Alberta was offered $346 million by the federal government to top up front-line workers’ pay, money that went largely untouched until now.

“By waiting so long to access these funds and giving them to some workers and not others, Premier Kenney is trying to divide and conquer workers while proving he is only interested in distracting Albertans from his massive, endless, self-inflicted failures,” said AUPE President Guy Smith.

Smith said “not nearly enough” workers will receive the payment since some part-time and casual workers may not meet the 300-hour threshold.

With the provincial budget coming in two weeks’ time, the NDP’s labour critic said she’s “deeply concerned” the announcement is a “smokescreen” by the premier.

“Jason Kenney has already committed to laying off 11,000 front line health-care workers after the pandemic ends,” said Christina Gray in a news release. “It’s $1,200 for Albertans today, and a pink slip tomorrow.”

Employers are responsible for applying for the benefit and distributing it to their staff.