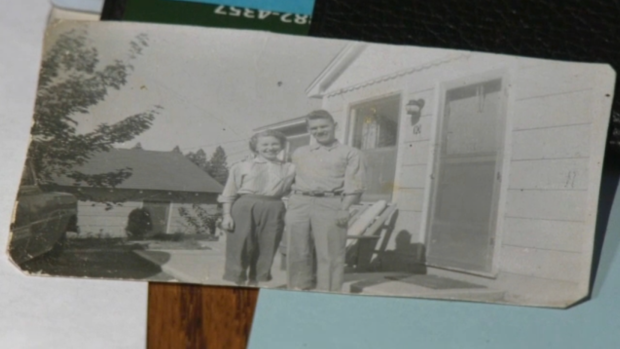 EDMONTON — On Friday, Pauline Oliver turned 90 years old. Sunday, she celebrated Valentine’s Day for the first time in 64 years without her husband Allan.

“I try not to think of it, but that’s the way it is” said Pauline while sitting at her daughters home in east Edmonton.

A weekend usually devoted to celebrating a six-decade long love affair between Pauline and Allan is now more about remembrance.

“He was looking forward to celebrating mom’s 90th birthday this year, and they would have had 65 years of marriage (in September),” said her daughter Crystal Damer.

In mid-December, both Pauline and Allan were diagnosed with COVID-19 at their nursing home.

Just two days later, Allan passed away. But not before writing the final Christmas card to his long time wife.

He also wrote long poems to Pauline on every milestone birthday.

So it was no surprise to the family when they found an old black and photo from their honeymoon hidden in Allan’s wallet. He had it there since 1956.

“We only found out in the last little while that’s he’s been carrying this around for all these years… it’s amazing” remarked Pauline’s daughter in law, Eman.

A February usually filled with the soul affirming bond between a pair of newlyweds from the 50’s… now a testament to the long lasting power of love.

“You just remember them as best you can. And you keep them in your thoughts” added Crystal.

A different Valentine’s Day yes, but for Pauline and her large family, just as meaningful as ever.