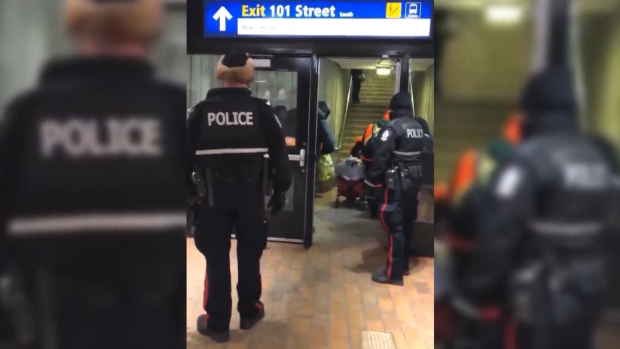 EDMONTON — The Edmonton Police Service is offering an apology for removing homeless people sheltering from the cold in the Central LRT station over the weekend.

“We should have arranged transportation or helped in accessing the services our partnering agencies have in place to keep our most vulnerable safe and warm,” deputy chief Al Murphy said at a community and public services committee meting Wednesday morning.

“We must do better and for this, we are sorry.”

The statement followed days of public and civic outrage over the incident, videos of which were posted to social media by the Bear Clan Patrol.

The actions were “not reflective of our community’s values nor the tireless efforts of many social agencies,” city administration’s Rob Smythe added.

Both promised the city and its agencies would improve its extreme-weather protocols. On Tuesday, Murphy met with the Bear Clan Patrol. And work is already underway to create a joint standard operating procedure with EPS, according to Smythe.

“We are committed to doing better for our citizens and delivering the services they expect with compassion and empathy,” Murphy vowed.

INQUIRY DUE IN SIX WEEKS

At the beginning of the meeting, a motion requesting a formal inquiry into the incident by Mayor Don Iveson was passed.

In six weeks – half of the time usually given to such a request – administration will provide a report going over the city’s extreme-weather procedures, including the expectations for how these are followed and how they were carried out over the weekend.

“In light of the extreme cold weather we’ve been experiencing as of late, it’s heartbreaking and it’s frustrating to watch,” Iveson had commented a day earlier.

As was reiterated by Smythe Wednesday morning, the city no longer uses LRT stations as emergency shelters given expanded shelter space opened during the COVID-19 pandemic.

“At all times during this activation, there was room in the shelter system for all who sought access to it,” he told councillors.

“LRT stations are cold, they are uncomfortable, and they’re certainly not designed for sleeping. They do not meet any definition of an acceptable place to use for overnight shelter. We know that the better solution is to instead ensure that transportation is not a barrier to accessing proper facilities.”