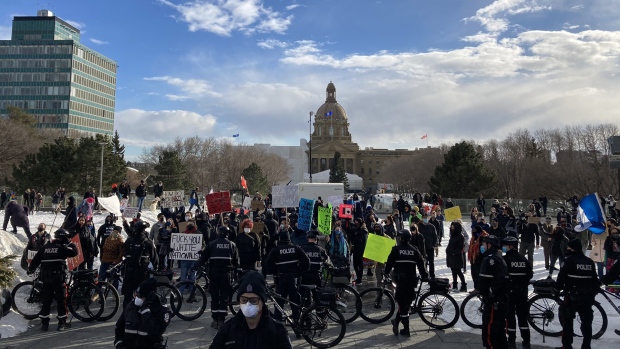 EDMONTON — At least one person was arrested after two groups with opposing perspectives held rallies at the Alberta Legislature on Saturday afternoon.

The began to gather on the grounds around 2 p.m. One group said it was fighting racism, the other, the Walk for Freedom Albert organization protesting pandemic restriction measures.

The two rallies were separated by lines of Edmonton Police Service members.

A group of GraceLife church supporters also showed up, demanding the church’s pastor James Coates be freed from jail after his arrest for allegedly violating public health orders.

For the most part the clash of the different groups remained peaceful, but a small group of demonstrators swarmed police as they arrested on someone from the group and tried to walk him to a waiting police vehicle.

It’s not yet known what if any charges have been laid against the protester.