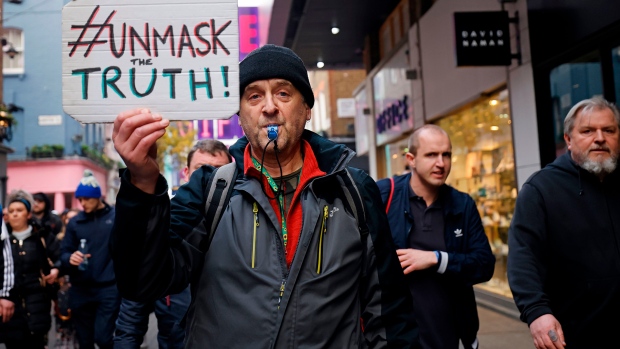 It’s the first thing the 12-page “Conspiracy Theory Handbook” tells you: “Volkswagen conspired to cheat emissions tests for their diesel engines, the U.S. National Security Agency secretly spied on civilian internet users and the tobacco industry deceived the public about the harmful health effects of smoking,” it says. There was a reason conspiracies like those came to light, the handbook explains. It was all thanks to “internal industry documents, government investigations, or whistleblowers”.

However, the term conspiracy has taken on new meaning in the age of social media. Despite what certain videos on YouTube and posts on Facebook would have you believe, there are not any mind-controlling nanomachines planted in the COVID-19 vaccine and no, Hollywood celebrities aren’t eating babies. These are all theories the conspiracy group QAnon pushes. Theories that legions of online followers accept as fact. I was curious why seemingly rational people would believe things posted online over what governments and scientists tell them.

One November afternoon, I went to a rally in central London, where a hodgepodge of conspiracies collided. Anti-lockdown/anti-vaxxers/anti-you-name-it were gathered to protest pandemic restrictions and mask regulations. Hundreds of demonstrators chanted “freedom” and held signs reading things like “Unmask the Truth” and “No More Lockdowns, No More Cover Ups, No More Masks, No More Lies.”

It’s easy to think that only people with funny-looking hats at a political rally are vulnerable to extreme conspiracy theories, but it’s simply untrue. There are no stereotypes. Education plays no role and neither does a person’s IQ. What most have in common, though, is the belief the world is made of villains and persecuted victims; they see themselves as the latter. Conspiracy theories fuel their sense of outrage and betrayal and give them a scapegoat for their grievances.

And those who believe don’t like to be called conspiracy theorists. In fact, they hate it. The way they see it, others are the ones incapable of thinking critically. So how do you talk to someone for whom facts seem irrelevant? Start by not mocking them, Montreal clinical psychologist Ghayda Hassan tells W5. It might be tempting, she admits, but that will only make it worse. Hassan notes the road back can take years and require professional help.

“We have to look at a person’s level of distress,” she explains.

There are often underlying issues that have never been dealt with and the right traumatic event – say, a pandemic – can easily trigger a downward spiral. The personal consequences can be devastating.

Spend thirty seconds on the Qanon Casualties Reddit group and the testimonials are both heartbreaking and maddeningly bizarre. One man talks about his brother, an Ivy League college graduate who is now so consumed by Qanon, he believes McDonald’s hamburger meat is made from kidnapped children. It’s become a place of mourning for those who have lost parents, children, or siblings to YouTube algorithms and don’t know how to get them back.

W5 had rare access to one man whose father is deep in the QAnon hole, with no clear way out: “as soon as he mentions anything conspiratorial, I don’t want to hear it… I miss what he used to be.”