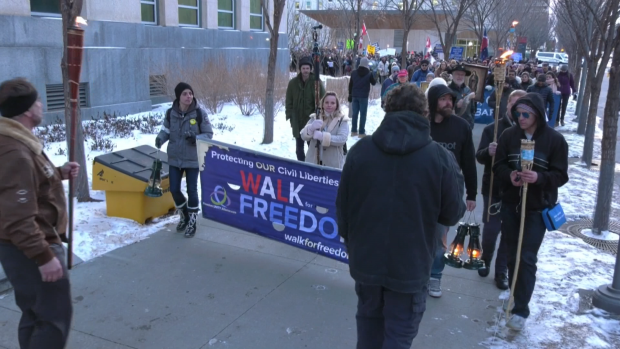 EDMONTON — A University of Alberta criminology professor is concerned anti-mask rallies, like the one seen in Edmonton over the weekend, are quickly becoming a cover to spread messages of hate.

That demonstration at the Alberta Legislature saw symbols that evoke racist beliefs on full display.

Of the two rallies held Saturday, one claimed to be anti-racism, while the other had elements of anti-maskers and lockdown protestors.

“This is becoming a pattern,” the U of A prof told CTV News Edmonton. “A pattern of citizens hiding under the guise of an anti-mask campaign, taking to the streets, bringing out symbols of hatred like tiki torches.”

Edmonton Mayor Don Iveson, while citing that many who took part in the rally may not have been from our city, said he was appalled to see the burning torches.

“A tiki torch is not an official symbol of hate,” he said. “But I think after what happened in Charlottesville in the United States people see it for what it is.”

One man was arrested briefly, and four officers were assaulted, resulting in minor injuries, according to Edmonton Police Association president Michael Elliott.

“A couple times it got pretty dynamic and the members are trying to do the best they can to keep things deescalated,” Elliott told CTV News Edmonton.

“The morale amongst the membership, I’ll say more specifically the front line I’m trying to think of good adjectives to describe it, it’s just really low right now,” he said.

Reached out to our 4 members injured during yesterday’s protest. Glad to hear they’re doing well! I’m extremely proud of the work of all of our officers. (1/2)

Reached out to our 4 members injured during yesterday’s protest. Glad to hear they’re doing well! I’m extremely proud of the work of all of our officers. (1/2)

EPS has not issued a statement on whether the weekly legislature rallies will be handled differently going forward, but did say that the incident and the protesters are still under investigation.

The criminology professor says he doesn’t want to see the protests shut down, but believes the social rules society is now facing must be enforced in order to extinguish the thought behind demonstrators’ symbols of hate.

“I worry that continuing to tolerate or even ignore the kinds of behaviours we are now seeing would only embolden those individuals because they would know there are no consequences.”

Nearly 48 hours after the rally, the premier issued a statement about the rally. The full statement reads as follows:

“Albertans value the constitutionally protected freedoms of speech and assembly. This weekend protesters gathered at the Alberta Legislature to oppose our government’s public health measures that are in place to protect the vulnerable, and our hospitals, from the COVID-19 pandemic.

I understand that publicity for this event incorporated an image apparently taken from the notorious 2017 Charlottesville torch rally, which was an explicitly white supremacist event. Prominent racists promoted Saturday’s protest at the Legislature, and individuals attended the event from known hate groups like the ‘Soldiers of Odin’ and ‘Urban Infidels’. I condemn these voices of bigotry in the strongest possible terms.

Albertans believe in the dignity of every human being, and have no time for these voices of division and hate, or the symbols that they represent.

Like any large public protest, there was likely a range of perspectives and motivations amongst those who attended. There is no doubt that some people came just to register their opposition to public health measures, which is their democratic right. But these people also have a responsibility to disassociate themselves from the extremists who peddle hatred and division, and who played a role in this event.”

“His statement raised more questions than it answered. While acknowledging certain elements of the racism at the rally, he omitted others and he proceeded to defend the majority of the rally’s attendees.

“Torch rallies have been associated with some of the most heinous displays of racism in history and Albertans deserve a Premier who is unequivocal in condemning hate and racism.”