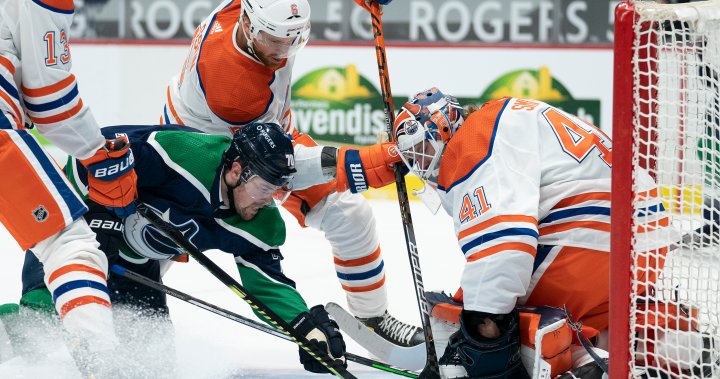 Mike Smith made 32 saves for his second shutout of the season as the Edmonton Oilers blanked the Vancouver Canucks 3-0 Thursday night.

Thatcher Demko shone in the Canucks’ net in the first period. He shot out his left leg to deny Leon Draisaitl of what looked like a sure goal on an Oilers power play. Late in the frame, Demko turned away Jujhar Khaira on a breakaway.

Alex Chiasson opened the scoring on a power play 7:41 into the second. He took a pass in front, whirled around, and banked the shot in off the post. Just over a minute later, Demko stopped Leon Draisaitl on a breakaway. Smith made several big saves as well and had 28 stops after 40 minutes.

With 7:25 to go in the third, Jesse Puljujarvi flipped a rebound past Demko to make it 2-0. Connor McDavid added an empty netter in the final minute.

The Canucks had just four shots on goal in the third. They were 0/4 on the power play while the Oilers were 2/5.

The Oilers, 14-8, will host Toronto on Saturday.