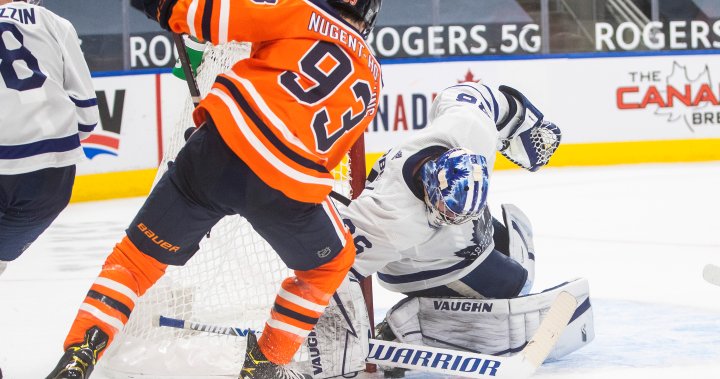 Jack Campbell made 30 saves to lead the Toronto Maple Leafs to a 4-0 win over the Edmonton Oilers Saturday night at Rogers Place.

The Oilers see their five-game winning streak come to an end.

William Nylander put the Leafs ahead on a power play with 5:23 to go in the first. Just 1:13 later, Mitch Marner snapped a shot past Mike Smith to make it 2-0.

“We didn’t play very well. There were a couple chances early but we weren’t sharp and didn’t capitalize on anything,” Oilers head coach Dave Tippett said. “We couldn’t get a kill on a penalty and then we chased the game the rest of the game.”

Jason Spezza rushed down the right side, faked a shot, then patiently wired the puck over Smith’s left shoulder with 8:45 left in the second.

“If you make mistakes against that team or give them a little bit of space and time, they make you pay,” defenceman Caleb Jones said. “We had some chances tonight, for sure, but they played hard and I’m looking forward to getting a rematch and getting those two points back.”

Zack Hyman sealed the deal with his fifth of the season with 6:26 left in the third.

“Every team has an off night every once in a while. I guess tonight was ours,”
Leon Draisaitl said.

We’re looking to regroup and go at it in a couple days.”

It was Campbell’s first game since being injured against Calgary on January 24.

The Oilers were shutout for the first time since February 26, 2020, when they were beaten 3-0 by the Vegas Golden Nights.

“I think next game we’re going to come out with a much stronger mindset and defending first and making sure we’re being physical with them and not giving them too many chances,” Oilers Jones said.

The Oilers and Leafs will play again Monday night..

With files from 630 CHED’s Brenden Escott.